My encounter with a Mongoose

As you all know Johann is currently participating in the Blogathon and asked me to write a story as a guest. Well, I gladly accepted the invitation.


And then yesterday I was walking on the trails while Johann was running in preparation for the Rhodes Challenge, I had the encounter with a Mongoose. During this encounter I thought this is what I would like to share with you. 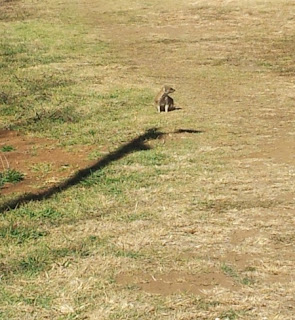 We started off just after 09:00 in the morning and my thoughts wondered around the work, the kids, the family, politics and just life in general. I noticed the birds singing and chirping, the sky a perfect blue, seeing a few planes. Other than that, nothing really significant! 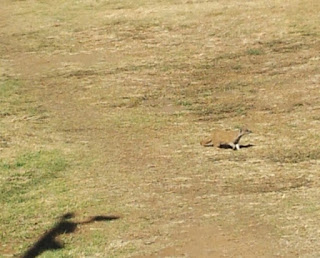 On my way back I saw the grumpy Black Wildebeest Johann wrote about yesterday in a distance. Then literally a few meters before I completed my walk, the mongoose was sitting on the trail, scratching some fleas and grooming his tail. 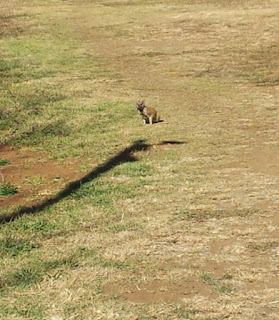 I stood still to observe him. I was certain the minute he noticed me he was going to run for “safety”. However, he just stayed put. I started moving foot by foot slowly forward not wanting to give him a fright. Eventually he ran into the bush, but not too deep because we stared each other in the eyes. I told him he was a magnificent animal and walked on. 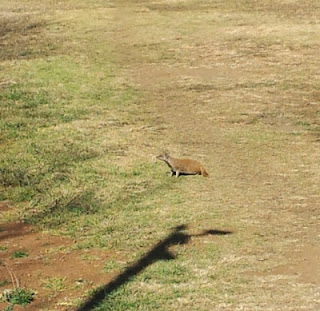 It was about quarter past eleven while waiting for Johann in the car to finish his run that I noticed the little bugger walking across the entrance with no fear. I grabbed my phone and took photos of him. He posed like my daughter in front of the camera. He came closer and I got a “photo shoot” of him from all angles. 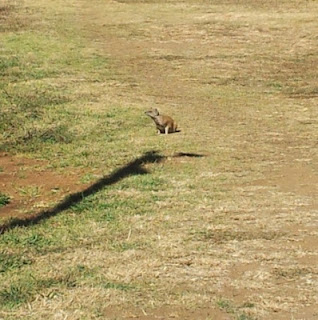 Once he was sick and tired off all the attention, he ran off. My eyes following him, he ran across the field. There he met up with a mate and they were very playful with each other. What really astouned me was his fearlessness. I suppose that is the story of his life, enjoying the sun, friends and freedom. 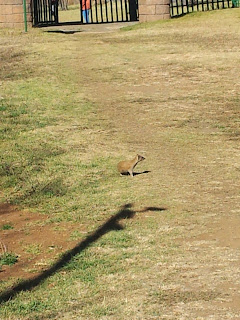 I always want a moral of a story and for me this one was that fear holds you back and limit you. I love the lessons nature teaches us!
Posted by Johann at 21:11

How amazing that you can encounter such creatures on your runs :) I love that it posed for you!