How I Peed On A Leopard

OK everyone. The 15th point of my previous post is explained below. Not that big a story but still one to tell...

How I Peed on a Leopard

Years ago I was fortunate enough to go on a 5 day hiking trip with a friend of mine. I had some contacts in the army that allowed us to do a hike on army property. The army bought 7 game farms and turned one into a military base. The other 6 were merged for later use but remained “untamed” for many years.

We decided to do a hike that would take us over the six game farms and just slept where we found a good spot. It was an amazing experience and we encountered lots and lots of game very close up. The best part was the feeling of total freedom we felt the whole time.

On the third day we decided to have lunch on top of a mountain with a spectacular view. My friend was busy preparing lunch and I was standing at the edge of a ravine admiring the unbelievable view. There was a ledge about 3m (9ft) below me that went all the way along the top of the mountain we were on.
I decided this ledge would be a perfect spot to pee on. Yep, I was a free man in my early twenties and this appealed to me…J So I did the P thing 3m down while admiring the great view. The next moment we heard a growl and a leopard suddenly got up right below me where I was doing the P thing…right on him! He got up with a growl, looked at me, and then walked away on the ledge…not pleased at all. 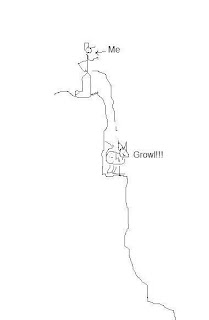 We didn’t hang around to see where he went or what he did next. We had our lunch an hour and a lot of kilometers later. I can’t remember if I completed the P thing or not. I can confirm that at least I didn’t do more than the P thing…it might have been close.
And that's how I peed on a leopard!
Thanks for reading! Have a super week everyone!
Posted by Johann at 11:17 46 comments:

21 Random Things About Me

AJH at Age Groups Rock did a 21 Random Things About Me post a while back and I thought it a good idea to do the same. So here are 21 random things about me.

1. I am a very big stats fanatic.
2. I’m seen as quite the nerd.
3. I have very green fingers, everything I touch grow out of control.
4. I drink a lot of coffee.
5. I don’t drink tea at all…never!
6. Although I live in Johannesburg, I’m stopped very often on my way to work for cattle crossing the road. I love it!
7. I breed tropical fish and have literally hundreds of baby fish at home.
8. I love chocolate cake and sometimes bake my own for carbo loading before an important race.
9. I love chocolate milk and use it as my recovery drink.
10. Living in Africa is special for me.
11. I don’t like eating out and can easily skip restaurants for ever.
12. I love nature and being outdoors makes me very happy.
13. I love swimming but hate cycling so I stick to running.
14. I have completed 4 triathlons including one half iron man.
15. I accidently peed on a wild leopard once – true story!
16. The radio in my car has never been used although I use the CD player sometimes.
17. I finished my first cross country race with a broken arm.
18. I ran my second cross country race with my arm in a cast.
19. I’m the youngest of 4 children.
20. I don’t need much sleep and get by with 4.5 hours a day comfortably.
21. My best time for a marathon is 3:48.

Thanks for reading and happy running everyone!
Posted by Johann at 10:07 31 comments: