As I left home on Sunday morning for my trail race I was reminded that this is a winter trail series. It was 2°C (35°F) when I left home at 07:00. However, I’ve been talking about the great winter weather here in Johannesburg in some of my previous posts and Sunday was no exception. It was clear blue skies all round and by the time I reached the venue at Segwati Ranch, it was 11°C (52°F). The run was warm with short sleeves and finished at 19°C (66°F)…perfect!

I really enjoyed this race. The venue was good and the route was undulating, but not very tough. There were lots of rocky areas with loose stones, but no extremely technical parts. I think this was a good course for the first run in the series. 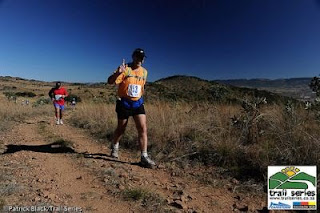 Enjoying myself on the lovely route.
There were quite a lot of first time trail runners in the field of 300 runners for the long course. I started very relaxed as I had a very relaxed pre-race time at the venue. Everything was organized well and went smoothly. I pre-entered, but we had to register for the series and collect our numbers before the start of the first run. You keep your number for all four races, so next time you can just get to the venue and run. My number for the series is 53.

There were a lot of people at the start, but many were waiting for the start of the short run 15 minutes after our race started. I saw Marisa, my HR director, at the start. She was running her first trail race and was a bit nervous. The only advice I could give her was to start slow and take it easy. 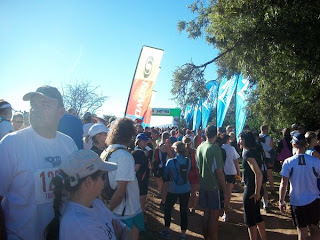 Waiting for the start.
The first part was slightly downhill on a small 4 x 4 type road (jeep track). This helped a lot to spread out the field. After about 2km the jeep track changed into two parallel single tracks and this is what we ran on most of the way. We also got to the first notable climb at this point. 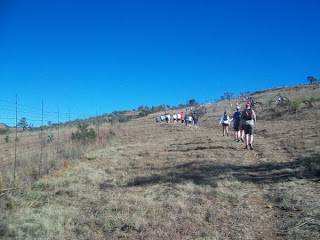 1st notable climb - is that sky blue or what?
I suppose hard core trail runners will say the trail itself was not technical enough and too much of the same thing, but I think it was perfect for this type of race. Not too difficult, but never easy. The views were spectacular all the way. 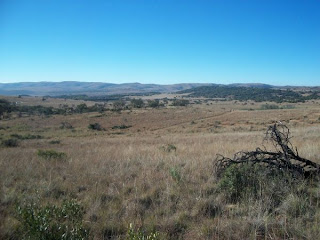 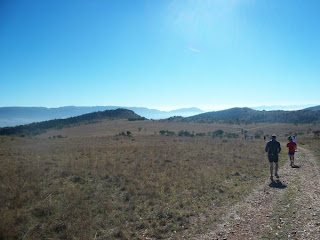 We climbed steadily for probably two thirds of the way with a few short descents between the climbs. We reached the highest point, or what felt like the highest point to me, of the route and then started making our way back towards the finish. 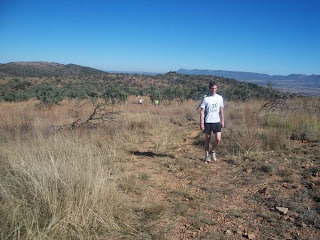 Reaching the highest part of the route.
The way back had more down hills and I was feeling good. That is one thing about trail running; you feel as if you are dying on some parts, but then you recover quickly on the next down or flat part. Some of the descents were steep with rocks and stones. I heard a few people saying that they would rather have the up hills than these rocky down hills. 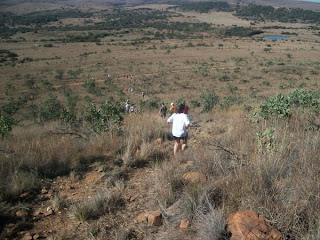 These down sections can hurt.
There are a few self catering chalets on the ranch and we ran past some of these on our way back. It looked as if all the chalets were occupied for the weekend. At one of these the occupants decided to have their own water point for the runners. This was great and appreciated by everyone. 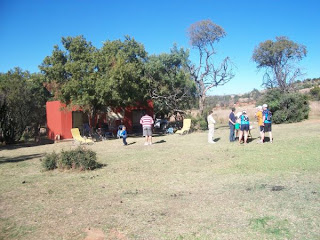 Looking after the runners. 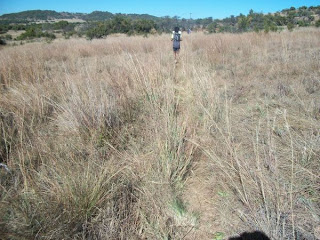 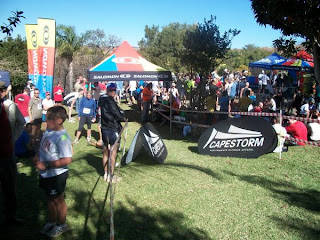 Festive at the finish.
So, “see you next week” it is. Race #2 is said to be the most difficult in the series. After the good experience of the first race I can’t wait.

These and more pictures can be viewed here.
Posted by Johann at 14:09

The photos look great - that is a fantastic blue sky.

It is so beautiful there! Love the color of the sky. Sounds like a perfect trail for the first run of the series!

Well done and loved the photos!

Great race and wonderful landsscape of that special part of the world.
I look forward watching your photos of the 2010 Fifa World Cup in South Africa.
South Africa meets Mexico in the opening match :) Good luck!

Hi Johann,
Thank you so much for always posting race pictures! It is so fun to see where you run and what it looks like in Southern Africa. BTW, it looks beautiful:) Great race report! Looking forward to the next! Have a wonderful week!

Great photos, makes me want to visit. The "see you next week" make we want to race with all of you!

Wow, that sky is beautiful, looks like the blue skies we always have in Colorado! Such pretty scenery, too! Glad you enjoyed the race, look forward to next week's race report! Run strong!!!

Yep, that sky was blue. How nice of the holiday-makers to set up a water stop for you.

The blue sky is gorgeous! I love those big trail runs where everyone comes together to enjoy a long run, it looked like so much fun!

Those are blue skies! Love all the pics.

What a beautiful sky...great photos! Sounds like such a nice race...:)

I would love to have your weather right now! Great pics, easy when you have such a lovely location! Cheers!

What awesome temperatures for your run. It looks like such a beautiful trail.

Congratulations on a great race - can't wait to hear about the rest of the series!

A trail series sounds like fun. I'm glad your HR director is getting into the trail running too.

I had to laugh at your St. Elmo's fire comment. I dislike it when a song is still stuck in my head 7 hours later. Its even worse when it stays in my head when I try and sleep too.

Holy amazing town! Look how beautiful it is out there.. It shows us just how tiny we REALLY are!

The pictures remind of New Mexico.