Yesterday I ran the third race in the winter trail series I’m doing this June. This was race 3 of 4. This was another tough run with lots of ups and downs and zillions and zillions of loose stones. The views and scenery were the best of the 3 races so far. I even saw some Waterbuck and Blue Wildebeest on the run! Unfortunately they were running at the time and I couldn’t get pictures of them. 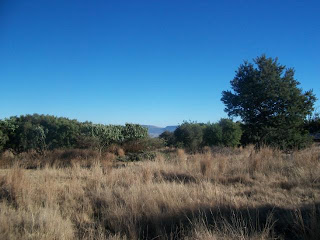 Another beautiful venue.
This race was really tough and the fact that I ran 21km the day before didn’t help much either. I’m still busy with my buildup for some marathons and ultras later this year and decided to run the last two trail runs in the series “on tired legs”. So I ran 21km Saturday morning and will run 25.5km this coming Saturday.

The race was run on some 4 x 4 or off-road track. Although not as technical as most single track, this was still a very challenging route. We started on some down hills with a few little bumps here and there. 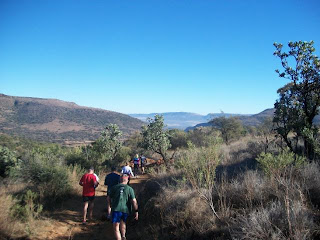 Shortly after the start.
I started very slow and almost right at the back of the field. I wanted to feel the effect of my run the day before first. I was happy that early on all was fine. We ran down some more and passed this waterhole. 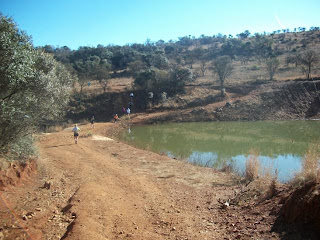 Not long after the waterhole the trail started to show its true colors, with loose stones everywhere. This would be the nature of the route the rest of the way, getting much worse in certain areas. 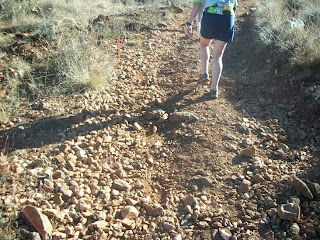 Loose stones became the norm of the day.
We ran next to a fence and could see the runners ahead of us going up a steep climb in the distance. 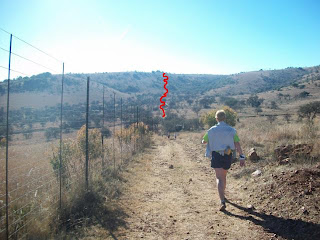 The red line is where the runners are going up. 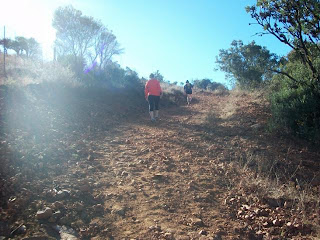 Not long and I reached this climb myself.
It was tough and I decided to just put my head down and get to the top. The scenery was absolutely fantastic and even though I was huffing and puffing and sweating like a pig, I was happy to be there. A friendly runner offered to take my picture! 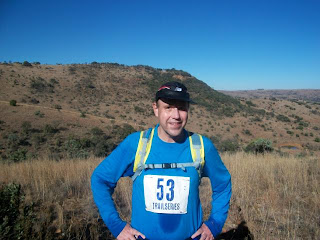 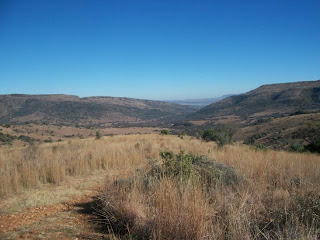 Great view from here!
Then we went down again, right to the bottom where we started, about 20 feet from the trail that we ran up. We turned and climbed again. This became the norm of the race. Steep up, steep down, steep up, steep down… My legs definitely felt this and some of the steep downs were hurting. All of this with loose stones covering the ground. 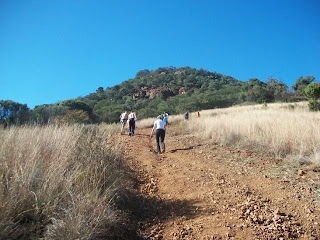 The 2nd tough climb.
Somewhere between 8 and 9km we got to one of the longest climbs of the day. I think this took us to the highest point of the route. The climb was really tough, but once at the top the view was worth it. 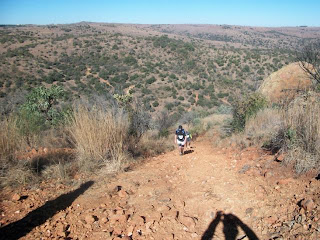 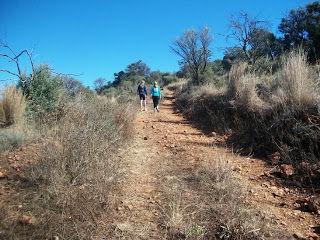 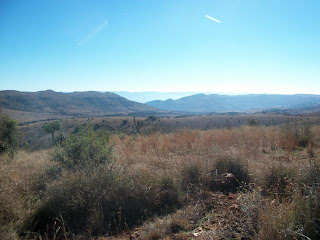 View from the highest point.
I was feeling tired but good. My legs were tired on the climbs, but I was still enjoying the run. I loved being out there!

Not long after the highest point the trail became very rocky and going down was really tricky. 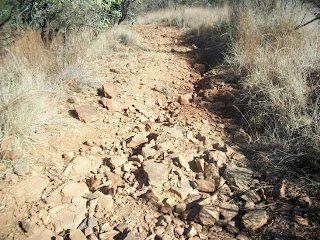 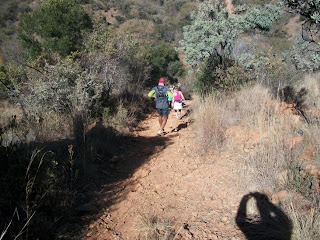 Runners going down slowly on the rocky path.
This was the first place where my legs actually hurt going down. Obviously all the up and down plus my 21k previous day run were taking its toll now. I adopted the motto of “head down and to the top” at this stage and just kept going.

I felt sorry for some people that weren’t carrying water or anything else. They must have struggled. I don’t understand how people can do this and I actually think the organizers should force people to carry some water. I had my hydration pack with 1 liter of water and 2 Gu gels with me. I used it all. 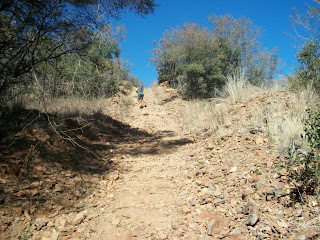 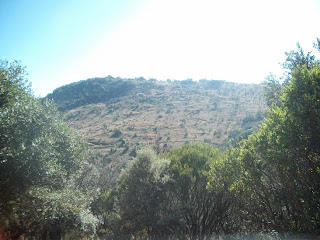 Looking back from the hill above. That is one of the climbs we did earlier.
Eventually we joined a “road” that was more friendly and this took us over the last climb to the finish. 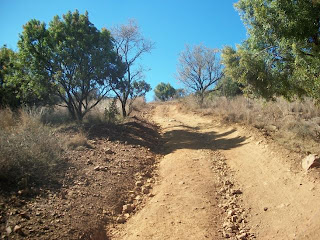 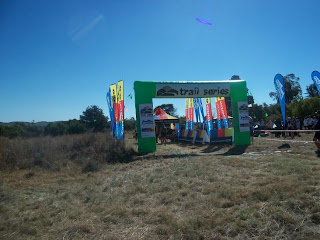 The finish...a welcome sight.
I was really tired and my legs were protesting at the end. But I did what I wanted to do and that is good. I ran on tired legs and although it was tough, I did it without any problems.

You can see these and more photos here.

Have a wonderful week everyone!
Posted by Johann at 21:23

amazing pics, thanks for sharing!

Yikes! Those hills look tough and dangerous! Great picture of you! Have fun with the last race in the series...

Serious hills there! Sounds like you had a great time with it though. Very cool

Challenging! I think you got your hill work out in for the whole season :)

Three down, one to go! What a great race report, I just love seeing your pictures. I went back through one of your older ones to show my 12 yr old daughter the picture of the giraffe you had taken. She thought that was so cool!

Looks like this was a tough trail, I agree, how can people do it without water! great job, can't wait to hear about the last one!

You are one tough guy...that's a lot of accumulated mileage! Great pics once again...your country is so beautiful :)

Hi Johann,
I have decided you are the male version of me with your race reports! Your pictures just rock and I really enjoy seeing where you get to run:) Your run looks so challenging with all of those hilly trails. You did such a great job taking us through your entire run:) I really like the picture of you at the top! You are looking pretty happy:) Nice job Johann!

Johan, do you ever get tired of people saying, "awesome pics"? I hope not. Those hills were ridiculous. Can't wait for #4. Thanks for visiting my blog BTW.

Nice report Johan, this weekend should be easier--done it last year.

Great post and a great run, congrats for the 3rd one wishing you the best for the next one. The photos as always are great, and I have really come to love the way you write the posts too, so I am always waiting for your next post!

What an awesome series! Look at you and your mad camera/running skills! I have a trail run tonight, looking at your pics makes me a little nervous, even though I know most of the big hills, sometimes I imagine them bigger before I head up them...
P.S. try the Betty Lou's Web site to see if they can send you a snack :)

Excellent report Johann which shows the hardness of the up hills. Seems that you enjoyed that adventure.
As I forecasted Bafana Bafana won against France. But was delighted to hear that their victory was in vain as they exit the competition.

That was a seriously hard race. Those hills looked awful. Congrats on just completing it.

Great pics! What a fabulous run. I can almost taste the dry dust in my mouth......we have some paths not unlike these in the W Cape, and hiking them was bad enough, let alone running! Very nicely done.

Great report Johann, your trails look very similar to what I have to confront here in Australia.