We had another beautiful day on Sunday and the weather was perfect again for running. The start was a bit colder than last week as the venue was at Hennops River outside Pretoria and right next to the river. When I arrived it was 5°C (41F), but it warmed up quickly and was 19°C (66F) when I finished. 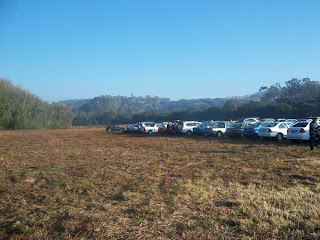 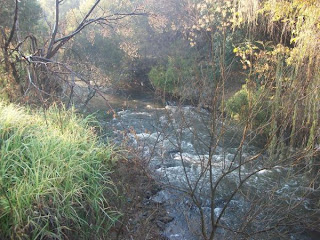 Hennops River flowing strong.
This was a tough race of about 12.3km. The race description warned to carry enough water and expect to be out on the trail for about 2 hours. I finished in 02:05:54. 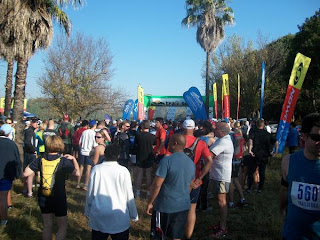 Waiting for the start.
About 350 runners started the race at 09:00. The first 3km was along jeep track that helped to spread the field before the single track started. I started at the back and just kept it slow and easy. It wasn’t long before I passed the first runners that started to fast. We climbed steadily right from the start and the jeep track ended with a long steeper climb that reduced most of us to a walk already. 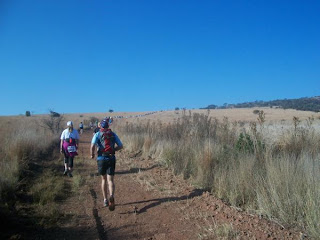 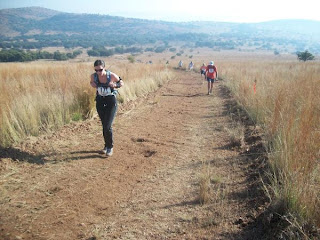 At the end of the jeep track I was a bit disappointed to see a queue of runners where the single track started. The 3km was not enough to spread us out. On closer inspection I found that we had to cross a fence with a small ladder where the single trail started. This was a one at a time fence crossing and I had to wait about 7 minutes for my turn. 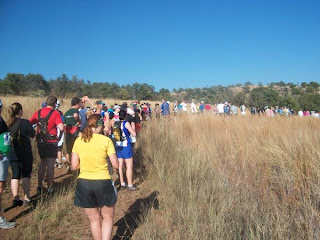 This queue was not great. 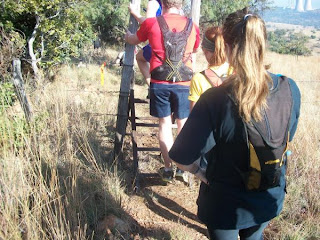 Crossing the fence.
Once over the fence the trail was rocky and very technical right from the start. There were lots of climbing and holding on with your hands and passing anyone was impossible. We were in a queue and there was no way around for anyone. To make matters worse I ended up with a chirper just two places behind me.

A chirper is someone that never stops talking on a run and never say anything useful or smart as well. They love their own voices and think they know best about everything and everyone around them love them. To give you an idea of Sunday’s chirper, among the first few things he said was:

To the girl running behind me and in front of him: “Hey Gorgeous, at least I get to stare at your sexy bum the rest of the way”. That was followed by various “Hey Gorgeous” comments and the rest was about himself. Never was he quiet for more than two seconds and never did he say anything that mattered.

Anyway, between all the chirping we started a heavy climb. No running was possible here and everyone just climbed and climbed, trying not to fall and making sure of your footing. The whole climb was technical with rock after rock after rock. 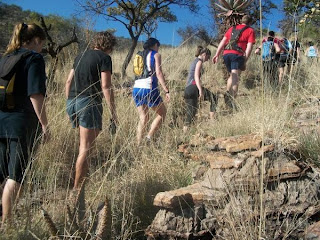 Apart from this and the chirper, the view and surroundings were spectacular and I was happy to be there. I love being outdoors in the bush and this was a typical South African environment. The smell and sounds were awesome, apart from the chirper. We finally reached the summit and the view was splendid! 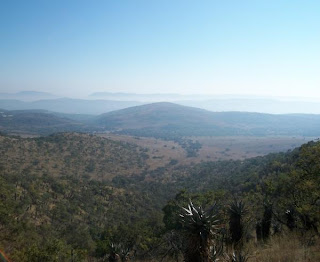 On top of the ridge we could run again. The trail was a little less technical here as well. We soon realized we were stuck behind a slow woman who didn’t notice she was holding us back. We all tried, even chirper, but she didn’t react to any of our comments/remarks or anything. Then I realized she and the two girls behind her were running with iPods and they didn’t know we were behind them. It was only when the guy in front of me squeezed in next to them that they realized we wanted to pass. Why people come run on a trail like this, with dozens of bird sounds and the sound of the wind through the grass and trees, with an iPod I just don’t understand. Why pollute the sounds of nature with music? Well at least they didn’t have to put up with Chirper. 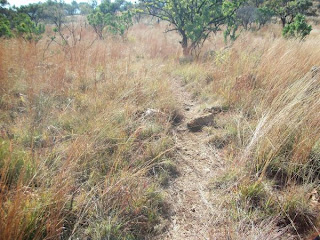 Trail on top of the ridge.
Once we passed them we could move a lot faster. I then decided I’ve had enough of Chirper and when we got to the next great view I stopped to take some photos and let him pass. The feeling of relaxation that came over me was fantastic. I was suddenly alone on the trail and could enjoy nature while I moved along at my own pace. 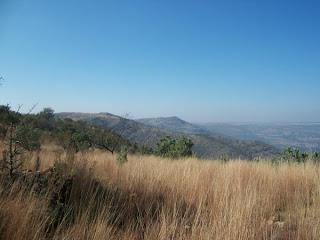 One of the pics I took to let Chirper pass.
We started going down and soon I could see the river below. Down there is where we have to cross over the river on a very suspect and wobbly bridge. But first we had to get down there. The down was technical again with lots of rocks and loose stones. Finally I could see the bridge for the first time. 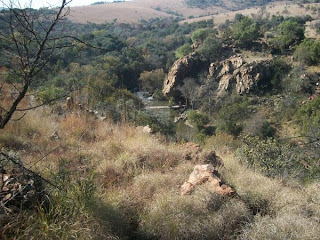 The river with bridge down below.
Climbing down was tough in places and I caught up with some people ahead of me. I could even hear chirper crossing the bridge! He obviously did it like no one else before him… When I got to the bridge there were a few hikers going in the opposite direction. I waited for them to cross, but they were scared and very slow, so I had to cross and pass them on the bridge. Luckily it went without incident and I crossed while taking a few photos. 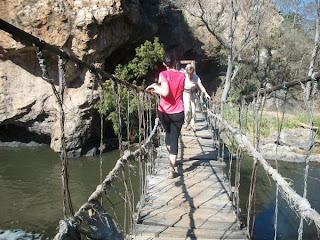 Immediately after the bridge we had to climb out of the river valley over some rocks again, just to go down towards the river again. The trail next to the river is beautiful. 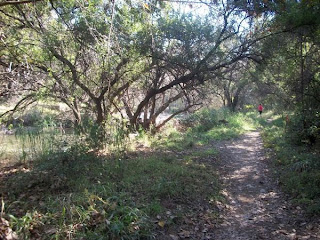 We ran next to the river the rest of the way. The river is flowing strong and the sound of the water was beautiful. I was happy and in a very good space. I wasted time taking photos, but it was great and I enjoyed every second. At some point we were right at the water. 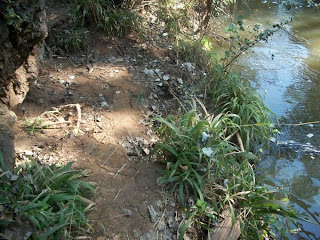 Then we turned away from the river and soon the finish came into view. I was running comfortably and crossed the finish feeling great. I could feel I had a good workout, but I felt strong and happy. It was a good run. 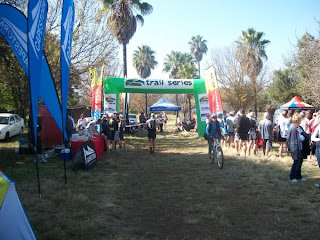 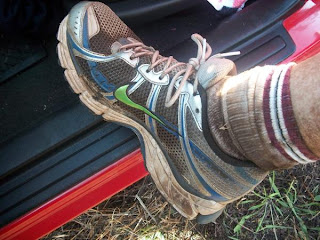 Sign of a successful trail run.
You can view these and more photos here.

Hi Johann,
Wow, this was a fantastic race report! I loved all of the pictures....beautiful scenery:) It looks like you had another challenging course with many obstacles to tackle.

Funny about the chirper...sorry about being right in front of him for most of the race:( I bet it was hard for you not to say something like..."Could you zip it up for a minute?"

I am looking forward to your next race report:) Have a great week!

Holy awesome dirty socks! Heck ya! Way to tell you got down and dirty, all while snapping amazing photos! I am glad you got the camera!

What a great recap...I love your photos and your dirty socks! You are totally tempting me to try a trail run after this first marathon :)

Beautiful race report Johann! I think it was a nice adventure and that bridge on the river is fantastic. I'd like running next to the that beautiful river which was flowing strong.

Great race report! I really enjoyed the pics and your description of the journey. I am a lot like you with regard to "chirpers" and "ipod users". I don't get it. Just like you say, why would you want to pollute the beauty and sounds of nature with useless talk and music. I'm glad you value the true benefits of being on a trail run! Looking forward to your next race report!!

Love the pics and the whole landscape! You are very patient to deal with the chirper and the traffic jam! Nice job! I use an iPod pretty regularly but when I go on trail runs or to someplace new and special I leave it home, you are right it "pollutes" the environment and the experience!

Looks like it was the perfect day for running and the scenery ... I honestly can't think of a superlative that's worthy.

What a great race report. That chirper would have driven me crazy! I can't believe the queue of runners in a race. That is too bad. But wonderful scenery and what a workout!

"Chirper" - I LOVE it!! I know a few I can put that good name to use! Absolutely gorgeous pictures and a fantastic run. Wow, that bridge would scare me to death! Well done on the race, well done!!

Chirper is hilarious. I have a few people I can call that...ha. AWESOME photos and great race!

One of these days I'll need to do a trail race. I think I would be very frustrated with a single track being unable to move forward, ahead of slower people. But one good thing is it gave you a chance to take pictures.

How can the chirper talk that long out loud to himself?

What an interesting race! Holy Moley that was quite a hill at the beginning and then having to stand in line to cross a fence? Wow!

I love the pics, it looks like a beautiful trail!

Maybe someone needs to "suggest" to chirper that he bring HIS iPod next time...

Johan, as expected, your awesome pictures did not disappoint.

Top of the line race report! Loved your narrative and accompanying photos! (South Africa looks like a beautiful country!) Nice work on the race itself as well! Glad to see you had the appropriate amount of trail dirt on you at the end, too! :)

That is one of the best race reports of all times! I loved your pictures! Awesome views!

I don't get how anyone would wear an ipod in a race like that either! And that Chirper Dude? UGH. The photos are beautiful!!

I LOVED your dirty shoes and socks. I always feel like I've had a GREAT run when I come home with dirty socks. I also laughed out loud about the chirper! When people argue, my husband calls it "chirping" so I loved your story but I'm so sorry you had to put up with HIM! I, once again, enjoyed your photos. Happy racing this weekend!