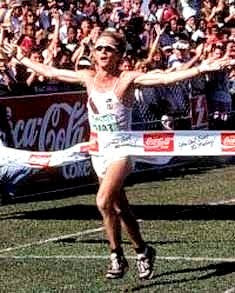 It is the Comrades marathon in South Africa on Sunday so I decided to write a bit about my running hero, the Comrades King, Bruce Fordyce. Yes, I’m not a kid anymore, but I still have heroes and with running my hero is Bruce. I often quote him in posts or comments so I thought those who don’t know who I’m talking about will benefit from this.
Bruce Fordyce is seen by some as the greatest ultra runner of all time and if you look at the times he was running in the 1980’s it still compares with the best of today. That he was in a class of his own is no question. 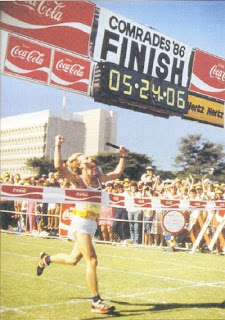 Bruce Fordyce winning the 1986 Comrades marathon.
He is most known for his 9 wins in the Comrades marathon, the greatest ultra in the world. However, he didn’t race only the Comrades. He won the London to Brighton race 3 times and set the world record for 50 miles (04:50:21) in 1983 during the race. He also held the world’s second fastest time (04:50:51) that he set in the 1984 AMJA US 50 mile championship in Chicago. In 1989, the year he skipped Comrades to run the world 100km championship, he set a world record for 100km on the road by winning in 06:25. He also, almost obviously, held both the up and down records for the Comrades. The down record stood for 21 years which gives you an idea of how good he was. 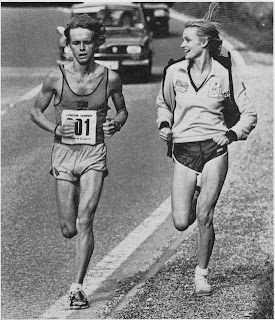 Bruce Fordyce with his sister during the 1983 London to Brighton. 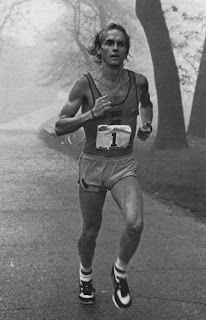 Bruce in the 1984 AMJA 50 Mile Championship in Chicago.
Another statistic that not many know about is Bruce’s best time for the mile. That is the mile on an athletics track. The Comrades Mile was run in the 1980’s with about 20 top Comrades runners taking part. Bruce showed his class here and won in 03:58! His best marathon time is 02:18.
The first time I saw Bruce Fordyce in person was in 1983, my 1st year next to the Comrades route on race day. His easy running style was remarkable and I became a forever Bruce Fordyce fan that day. He is a remarkable person with a natural ability to captivate an audience.
Nowadays Fordyce is often seen at endurance events participating to raise money for Charity. He has written a book, “The Marathon Runner’s Handbook”, and had a book written about him, John Cameron-Dow’s “Bruce Fordyce: Comrades King”. He is a highly sought after motivational speaker and is also the CEO of the South African Sports Trust. 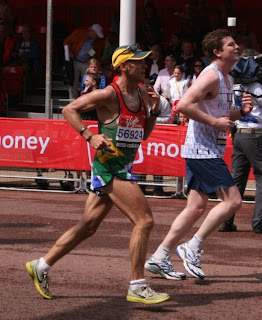 Wow. I didn't know all this about Bruce Fordyce, thank you for sharing. I can absolutely see why he would be your hero.

Great post! What an inspiration! Also, where did he get those South African split running shorts? I need those. Yes "NEED" as in "to sustain my life"...

Amazing guy! I hate to admit it, but I was unfamiliar with him--thanks for enlightening me!

Interesting post about the Comrades King! I didn't know that his down record stood for 21 years. Have a nice running weekend!

I think it's perfectly normal to have heroes, doesn't matter how old you are. One of my heroes is my running friend Jenny who, last year at the age of 55, was selected on the Australian Triathlon squad for the world champs. Another hero is a 90 year old that I know who still does gym classes. Both are awesome women.

Thanks for that! Ja, I remember Bruce Fordyce very well indeed! What an amazing guy...was and still is. Bruce IS the spirit of the Comrades...I can't talk of the one without thinking of the other. Running up, running down....it was all the same to him! There was no preference.

Hi Johan,
I just listned to a gread podcast episode from Endurance Planet about a 2:13 Elite Marathoner running this race for the first time. I won't spoil the ending.

Mine is Joan Benoit Samuelson - she was the first woman to win the marathon in the Olympics - about my age -still a racer and runner. Lives in New England. It's fun to have heroes.

Wow! Thanks for sharing your hero with us :)

I haven't heard of him before, I love reading about inspirational runners! Thanks!

Hi Johann,
I had never heard of Bruce before but it sounds like he was an amazing athlete and runner! Thanks for sharing and posting those great pictures...I love the one where he is running with his sister:) He looks happy...and check out his leg mescles!

I hope that you have a wonderful weekend Johann:)

Everything I know about Bruce and the Comrades Marathon is through you. You talked about up/down. Do they switch it every year? Is one way easier?

I loved hearing about Bruce, very interesting indeed!! Thanks for all the info and broadening my knowledge of the marathonw world!

I've never heard about Bruce so it was interesting to read your post. We seem to get so used to hearing about our US heroes and it's great to hear about what others have done over the years. I hope the marathon goes well and that you get to see your hero!

I have to tell you I thought about you in my race today. I had had it near the end. (post coming soon) There was a hill very near the end and I remembered your walk if can't run faster comment and I walked it! I am not sure if I could have run it faster but it was what I needed to do right then. I am a pretty fast walker so feel overall it was the way to go!

very interesting, thanks for sharing!

Thanks Johann! Your encouragement along the way has been amazing :)

He is legendary indeed. I hope to run Comrades someday! Do you recommend up or down?