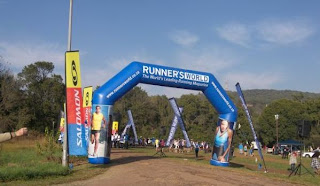 Finally after a crazy but very fun weekend I can get the report of the Runner’s World Wildlife Challenge done. This was a very nice race with a very relaxed and enjoyable vibe overall. The race was run at the Groenkloof nature reserve in Pretoria. 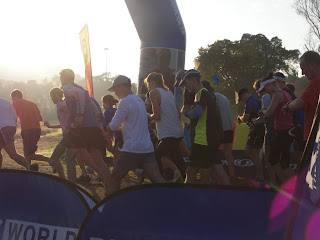 The start was at 7:30 and it was a beautiful, fresh morning. Although it was a short race, advertised as 12 to 15km and 13.1km in the end, I decided to carry my hydration pack with water as well as a few jelly babies with me. I want to be 100% comfortable with everything I need to carry on longer runs so I often carry more than needed on shorter runs as well. I see this as part of my training. I also took my new camera with me to take a few photos and see if I can get comfortable with that. 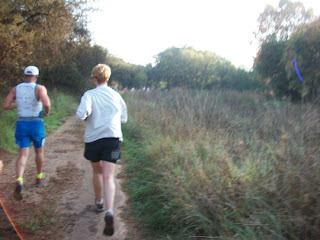 My 1st photo during a run or race
We started quite fast and everyone was running as if they had to be somewhere in a hurry. Maybe they wanted to get ahead of some people before the single track started. We got to this after about 0.5km and I just fell in behind the guy in front of me and kept going. The pace was still a bit fast for my liking and I realized later that I started close to the front and not close to the back as I normally do. 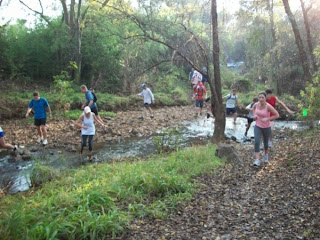 Soon we were at the first stream crossing and I decided to stop for a photo. This gave some runners that were in a big hurry a chance to pass and I could start some experimenting with the camera. My main concerns were keeping it dry and not dropping it. I had the camera in a plastic bag in one of my running belt’s pouches. This worked well but I did realize if I wanted to take a lot of pictures I’d lose a lot of time. On a trail this is probably worse as you need to be careful not to fall as well. I’m sure taking pictures during a road race would not waste as much time. 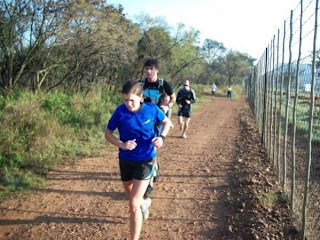 We entered the reserve and ran on jeep track next to the fence for a while. Then we turned onto the single track again and also started climbing. There were plenty of rocks on the trail and it twisted and turned all the time. My last time on a trail was in January so I had to get into “trail mode”. It was a perfect morning and I loved every second of the run. The route had something of everything. Jeep track, single track, stream crossings, some sand, rocky areas, tall grass and even a short bit of tar road. 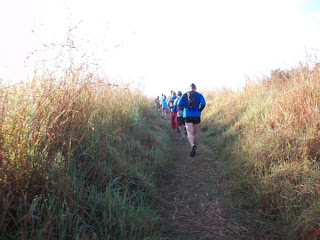 There is some game in the reserve but I only saw a few giraffes just before the first water point. I stopped for a quick photo, but the sun was not ideal. At least you can see a giraffe in the picture if you look closely. 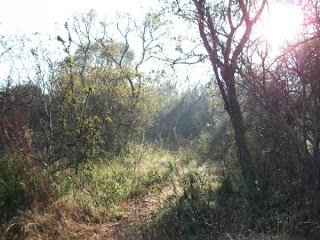 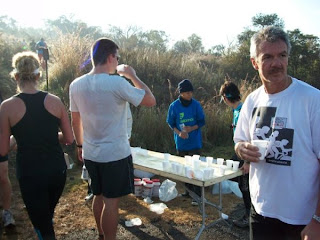 We climbed more from here and there were some very technical parts with rocks and roots to climb over. I was having a ball! It was just great to be out on a trail. At some point I could see the leaders running through some long grass down below. They were flying! 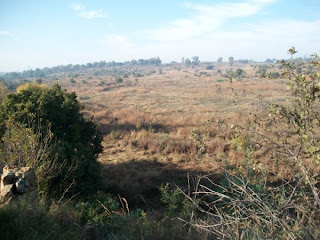 We started our way back through the long grass and the field was spread out and sorted according to pace now. I was very relaxed and just had fun. I passed the second water point without stopping as I was relying on my hydration pack. I also ate a few jelly babies just because I had them with me.
The single track back to the finish was very rocky. I had to concentrate on my footing all the way. My legs were a bit tired on the climbs, but this was from the past two weeks running and training and not because of the trail. 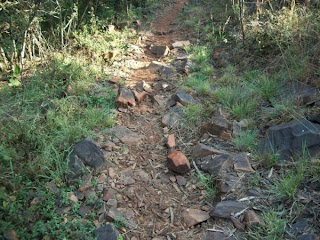 As I neared the finish I was feeling fantastic. I ran very comfortably and the thought of the four trail races I signed up for in June excited me. My son was waiting for me on the road to the finish. He could see the runners approaching from far and screamed and waved when he saw me. It was great. As I came closer he sprinted ahead and I tried to catch up with him but couldn’t close the gap. 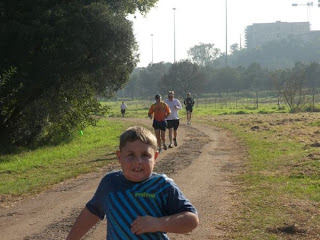 I crossed the finish line happy and even a bit disappointed that it was over so soon. I was happy and everything was perfect. After all the road races I’ve been doing this was very enjoyable. 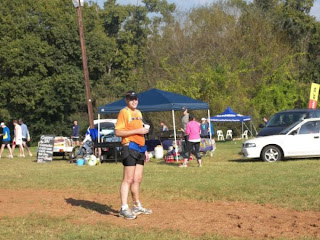 Hi Johann,
I love the great pictures that you were able to take with your new camera!! What a beautiful area to run in:) I am so close to finding some trail race that is near where I live! Trail running really looks appealing to me! This was great Johann, thanks for sharing!

That looks fabulous! And your son is so cute. How cool that you see wildlife like that...let's see, my most exciting wildlife encounter was a coyote. Not quite the same!

On another note--just finished a memoir by Peter Godwin on Rhodesia/Zimbabwe. Fascinating look at African culture. Really enjoyed it.

Beautiful path through the Pretoria's nature reserve. Seems you don'i mind to run near those stones on the path| If I ran that trail I'd enjoy a lot. You didn't have problem to take your new camera during the race. It's very nice the photo of your son who run behind you :)

AWESOME PICS!
Amazing views, I almost felt like I was there! Great job!

I think it was worth the extra time getting those photos :)

Thanks for taking the time to take the photos! It is so interesting the race conditions on trail runs elsewhere. Well done. Eric (Canada)

What is wrong with this sentence? "I only saw a few giraffes."

Ha! I guess it is so different for all of us.

Wow, I'm amazed by the giraffe sightings, too. I'm looking forward to when you get a shot of one!

I've gotten to the point where I wear my hydration belt no matter how short my run is simply so I can throw my camera in one of my pouches and have it handy. ::smiles::

Pretoria is beautiful, thank you so much for sharing. I'd love to run along that beautiful stream.

Looks like a great race, and handy that you had your hydration pack. I too take mine on even my shorter runs at the moment for practice.

A giraffe? That would be so dang cool seeing a giraffe. I get to see coyotes but nothing as cool as a giraffe.

I loved seeing your pictures taken along the race.

What beautiful pictures! Thank you for taking them and sharing them with us! It must be incredible to see a giraffe on a race, honestly that would make the whole thing for me! (i get excited when I see fox or a deer, lol!) It sounds like you had a very nice day and an even nicer race. Awesome : )

what a great race course!!! I can see why you were disappointed to finish!

Enjoyed the pictures to go along with your race report! This is a great idea, something I'm going to think about doing too!

How amazing that you get to take pictures of giraffes during a race :) :) Wow! Great pictures and sounds like such a fun race. I'm starting to get tempted by trail running :)