A thorn in the flesh…

This past Saturday morning I went for a training run on a trail in a nature reserve close to where I stay. The weather was perfect as it is most of the time during our winter. Cold mornings are followed by open-blue-sky-lovely-sunshine-days. Johannesburg is in a summer rainfall area so the sun shines 95% of the days during winter…lovely!

The reserve is not very big but there are some lovely trails to run with a few challenging climbs and drops over lots and lots of rocks. 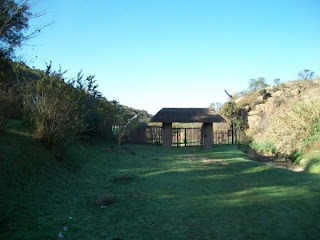 Entrance to the reserve.
I decided to run the Western Scenic Route. I’ve learnt over the years that anything with the word scenic in it guarantees you a tough climb or two. This route is no exception and after 0.5km the climbing starts. 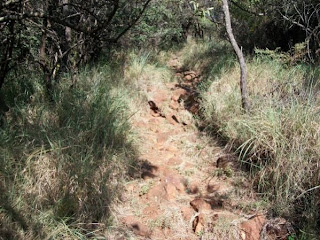 Rocky trail to the top
I was really taking it easy and didn’t run for any time. I just wanted to run the 9.4km at a comfortable pace, stopping for a few photos along the way. 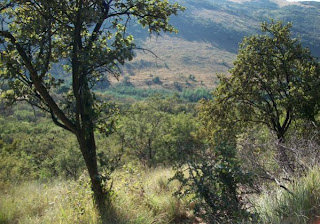 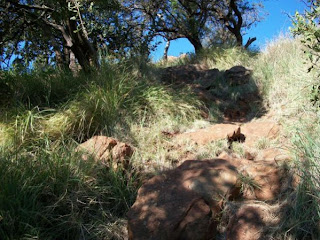 Look at that blue sky! 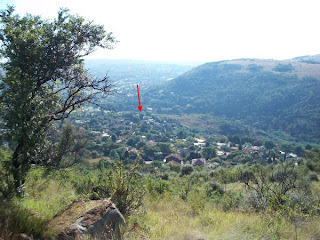 The arrow points to my car.
I reached the top of the first climb and started to relax as I ran along the top of the ridge. The trail makes a loop towards the North and then goes all the way to the Western fence of the reserve. There are many rocks to climb over and at times the going can be very slow, but also very enjoyable. 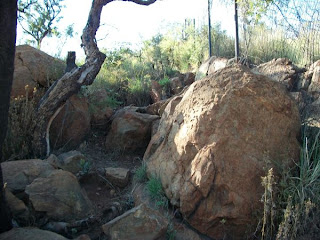 Next to the fence. The trail is somewhere...
I reached the highest point of this trail and stopped for some photos and water. I was carrying my hydration pack and a few jelly babies. 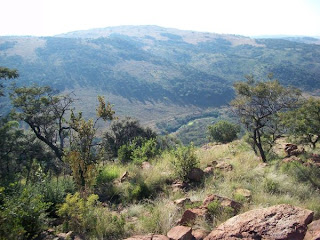 Highest point on this trail.
Just after I started running again I heard someone calling and when I looked up there was a group of hikers about 400m from me towards the West. At first I thought they were just greeting, but then I heard they were actually calling for me to help them. They were lost.
Being the saint I am I diverted off the trail through some very tall and tough grass towards them. There were stones an aloes covered by the grass and it took me a while to get to them. It was a few teachers with a group of children. They were going in the opposite direction that I were and lost the trail somehow. I directed them to the trail where I was when they called me.
Then being the dumb saint I am, I decided to make my way back to the trail by cutting diagonally over the field towards the trail instead of following the children directly to it. Little did I know that the trail makes a 90° turn away from where I was just after the point where I left it. The reason…to loop around a hill covered with some very nasty thorn bushes. 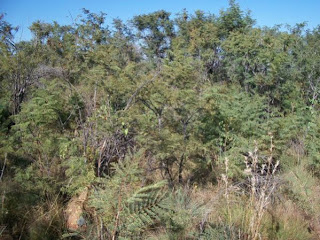 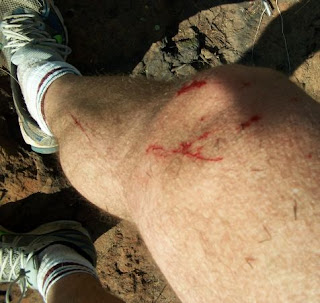 There was no way through these bushes, so I had to go back to where I met the school group and then back directly to the trail. That was the only way around this. Lesson learnt: don’t be clever and try to take a short cut. Just stick to the trail.
After this the rest of the run was pleasant. I met two very friendly donkeys next to the trail and stopped for a chat, some water and a photo. Then I ran down and started the 3km run back to my car on the “easy” trail that runs through the middle of the reserve. 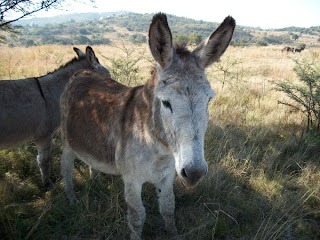 These guys were really friendly 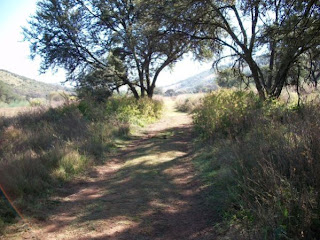 "Easy" trail through the middle of the reserve.
Back in my car my legs were on fire. The fire got even warmer when I hit the shower once I was back home. After that it was fine. At least I got to help some lost kids with their teachers. All in all it was a great run.
Posted by Johann at 16:46

You are hero of the day! Those legs look painful!

The early rocky section looks quite technical...it's nice that it finishes off with the easier part.

Nothing like giving blood and sweat on a run

I’ve learnt over the years that anything with the word scenic in it guarantees you a tough climb or two. That made me giggle.

That scenery is absolutely breathtaking.

That was very awesome of you to be a good Samaritan - and you even have wounds to prove you did a good deed!

I'm hurting looking at it.

what a beautiful place to run though!!

Are those donkeys?! Can you tell I don't live by [get out in] nature much? ;)

What a lovely place! Those injuries on your legs are like badges of honor; wear them with pride! Cheers!

Hi Johann,
Wow, you got to run looking at all of that beautiful scenery!! I bet it was so peaceful:) It makes me want to book a flight and run where you get to. Just let me know if there is snakes....that would be a deal breaker:)

Ouch to the scratches! Cheers to the hero/saint of the day! I am not surprised that you raced to the rescue:) Have a good one!

Ouch on those thorns - they looked horrible before I saw your wound pic and then that was all the verification I needed. You're such a man to run through that stuff, but it looks really cool. I love the pic pointing to your car!! Haha.

Ouch! They may only be scratches but I know how much they can hurt. I recently had a run-in with a carrot grater - Grater 1 : Char 0

What a beautiful trail! I love looking at all of your pictures! Bummer on the thorns, they look like they hurt! It was really nice of you to help out the kids, though : )

As a teacher I know you were greatly appreciated. Being lost on a hike with kids would be awful! Sorry about the thorns.

Ha, ha! I thought you were on "safari" until I saw the donkeys! I enjoyed the grass and boulders, such a rugged and gorgeous place!

And what did you chat about with the donkeys? Great blog post. Thanks for sharing your run with us.

Your new camera is adding a nice touch to your blog my broer.

So much fun you didn't notice your legs?! Or maybe your just way tough! Amazing pics!

What a beautiful area to run in...you are definitely spoiled when it comes to running trails! Gorgeous pics :)
You are a hero...good for you for helping out. That looked painful though...

Beautiful trail report Johann! Thanks for sharing those landscapes of that special part of the world. I know that kind of donkeys with black stripe. In Italy they live as protected wild donkeys. I wrote about it in my post of the 1st of April.