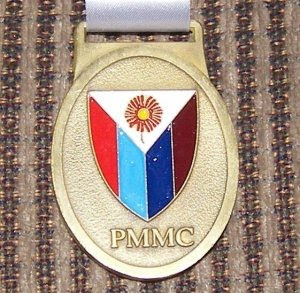 After a very chaotic week at work (that seems to be ongoing today) I was really glad when the weekend finally arrived last Friday. With two races lined up for the weekend it could only be good. I’m glad to say it was very good!

We left home at 04:30 Saturday morning as I didn’t pre-enter for the 25km race and it was in Pretoria. We were parked at the venue at about 5:30 with 30mins to enter and get everything ready. Entries went smoothly although we had to park quite far away, so I had about 15 minutes to get everything ready in time. I’m well organized with my pre-race routine and was standing at the start with 7 minutes to go.

There was a big field and everyone was very excited and full of chatter. The Comrades marathon is close, the rugby season is reaching a climax and many runners are at their peak training for the year. The start was good but rather congested. The road was not wide enough for everyone and we had to walk from time to time the first two kilometers. We ran a loop through some houses with a very steep hill right in the beginning and then passed under the start banner from the opposite direction before we continued out onto the course.

This race is organized by the military marathon club and we ran inside the military area the whole time. I had some flashbacks as I was in the army here in 1985. We passed the mess hall where we used to eat and the memories weren’t all that good...

Luckily I found some good friends on the road and we started chatting. I ran with Yvette and her twin sister and was feeling relaxed. No one was in a hurry and we just kept a steady, relaxed pace. I was running a 15km race the following day so easy going was my motto for the day.

Just after 3km the front runners came from the opposite direction and it was great to see them racing past, already nearing 8km. I enjoyed seeing Josia Thugwane, the 1996 Olympic marathon winner in about 5th place. The guy is amazing and still wins local races and ultras often and place in the top ten in almost every race he runs. 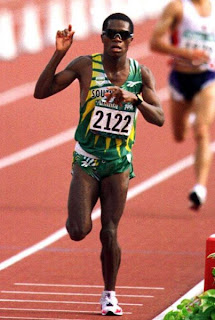 Josia Thugwane
The first half went very well, but we ran more down than up. I knew we would start climbing soon. I was happy to hold back and stayed with Yvette who was pacing us very well. We were joined by Emmy at the halfway mark. She was running her first 25km. Yvette’s best friend, Susan, also joined us. It was great to have some good company as it really made the distance go by very quickly. Susan is one of South Africa’s true ultra legends, having won numerous hundred milers, including the famous Washie 100. 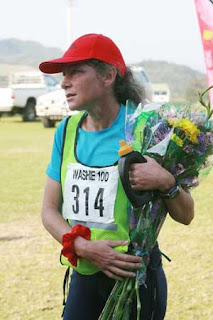 Susan Hurter, top SA ultra runner
The climbs started and although I felt very good, I could feel I’ve been running for more than two hours. Our group stayed together and Yvette had us on a strategy to walk from lamp pole to lamp pole on the steeper hills, saving energy for the last 5km as she put it. Susan confirmed this…save energy on the hills, you’ll need it later. I was happy with this. I’m not sure how Emmy was feeling, but I was definitely happy every time we took a walk break on one of the hills.
This strategy worked and before we know it we were at 23km with 2km to go. From here it was nearly all downhill and I definitely had enough energy to run comfortably to the finish. Saving energy on the hills worked very well and I felt strong as we ran onto the field. It was a long run around the field to the finish and we were happy to cross the line in 02:56:04. 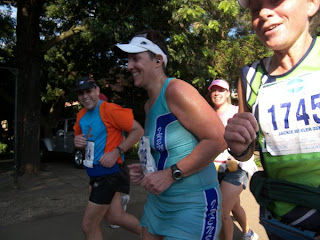 Entering the stadium...I’m on the far side with Yvette in the middle and Susan closest to the camera. Emmy at the back is very happy to finish her 1st 25km race.
A big thanks to Yvette for pacing us and well done Emmy on your 1st 25km finish. It was a very pleasant run and I’ll be back for sure. After the race I was glad to see one of my old friends and another ultra legend, Hazel Quilliam. She had just collected her prize for winning the Grand Masters category in 02:31. 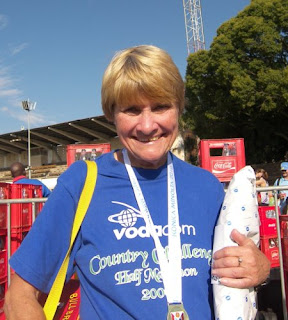 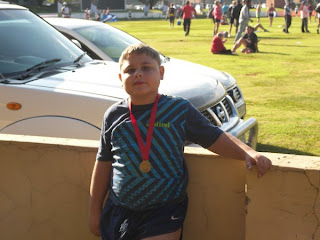 Rohann ran the 5km fun run and was also photographer for the day.
Posted by Johann at 14:19

Congrats on a great race! I am so impressed that you are running two races on the same weekend...rock on Johann :)

Great job on the photos Rohann!

I'm so glad the hill energy conservation method worked so well for you, Johann. Congratulations on a great race!

I can tell from the smiles on your faces that it was a great race! The atmosphere sounded very energetic!

You finished with a big smile, so that says a lot! Congrats.

Wow, congratulations on a great race, so full of happiness. I love all your pictures and the stories of all the "famous" runner! Thanks for sharing!!

Hi Johann,
Look at that gorgeous bling:) Your son did a great job taking pictures...you have several nice ones! Great job on your race! I agree...you have a big smile on your face! I love it...a happy runner:)

nice job. sounds like there are so many races to choose from in SA. my brother in law is from Joberg (or some place near there), he lives in the states now. i hope to travel to SA to run Comrades and visit his family one day. its just looks beautiful!

the. smile. is. awesome.

That is a long race. Congrats. You certainly saw a lot of well known racers.
That is one thing I like about running. You can race with the "big guys." That isn't true in most sports.

Wonderful report and thanks for the nice pictures. It sounds like you had fun, keep it up!

2 races on the same weekend..your a mad man! I'm lucky if I can survive 2 short runs in one weekend!
I love that you finished with a smile...that is how all races should end!

My brother suggested I might like this blog. He was entirely right.
This post actually made my day. You can not imagine simply how much time I had spent for this
information! Thanks!
Review my web-site ... diet that works