The Vaal River forms the Southern border of the Gauteng province where I stay. This is about 50km from my home and the venue for the Vaal river Trail Run was 47km from home. It was a cold drive with the temperature going down to -2°C (30F). I think it went down more before the start of the race. I arrived quite early and after I registered chose to wait inside my car. 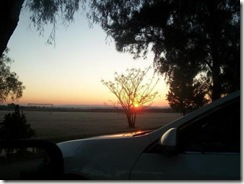 Watching the sunrise from the warmth of my car.

There weren’t many people when I arrived and as the time went by people started arriving but I could see this would be a small race. In the end there were 94 finishers for the 20km that I ran. There were a 5km and 10km run as well but even with everyone together there weren’t many at the start. Waiting for the start.
I saw Staci, our sandal girl, at the start and even the very cold conditions didn’t keep her out of her beloved sandals. 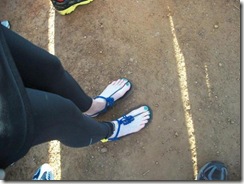 I started the race with Staci and ran with her up to the point where the 10km and 20km races split. She was doing the 10km so this is where we parted ways. Away we go! Staci in the yellow top.

The first few kilometers were through open grass fields. It was a gradual down run towards the river and I mentioned that we will have a gradual up to finish with. 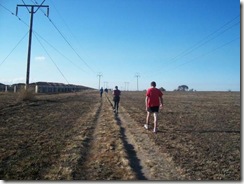 On our way to the river.
The 10km split came before we reached the river and I think this was a bit disappointing for some of the runners. As I got to the river I was very happy I was doing the 20km. The river early in the morning was really beautiful. 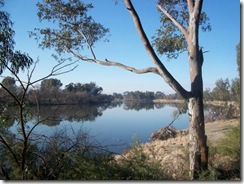 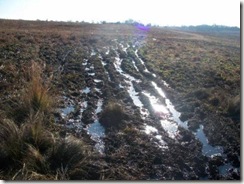 Some mud hopping had to be done. I love mud!
We followed the river for some time, turning away from it at times. We ran on several different surfaces and I enjoyed that. Single track, jeep track, grass, gravel road, tar road. I enjoyed the mixture. The only bad thing, and I think this is from my point of view the only bad thing about the race, were some areas that are badly polluted. Seeing the pollution made me angry and sad at the same time. The river is so beautiful, why can’t people just leave it like that? 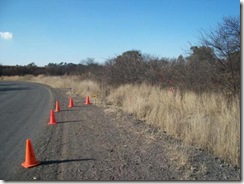 Off the road back onto the trail. 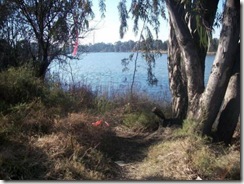 Trail on the river bank.
When we turned away from the river to start the return trip, we ran through some area where they were digging (mining) for something. I don’t know what they do here exactly, but although not pretty, I enjoyed running through something I don’t often do. 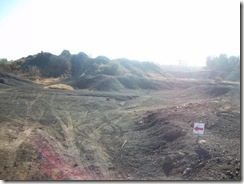 Not sure what they dig (mine) for here. 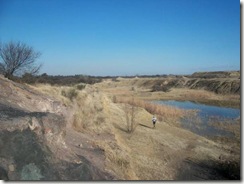 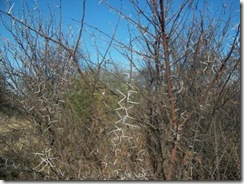 Don’t want to get stuck in there… 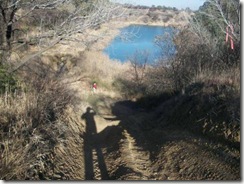 Steep, slippery downhill.
The run was certainly not the most scenic, but I found it interesting. The second half took us back towards the residential areas, but we still had various types of terrain and obstacles to cross. 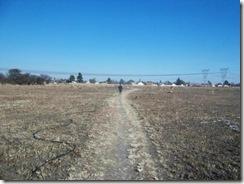 Back towards the residential area. 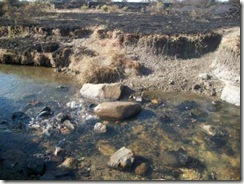 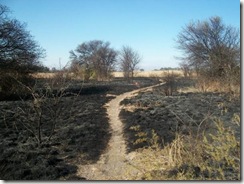 Some burnt grass.
We eventually made our way back to the point where the 20km and 10km races split. We then followed the 10km route back to the finish. We were away from the river now and just outside the local neighbourhood. We still had a steam to cross and a dam to look at. 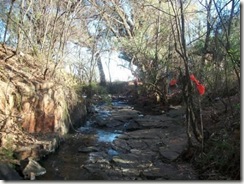 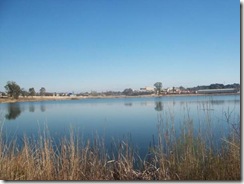 Dam with Vaal University of Technology in the background.
The last part of the run was mostly through grass. There were two runners ahead of me that were very aware of me and obviously didn’t want me to catch and pass them. They were tired and kept looking back at me when they took a walk break. I smiled and thought, don’t worry, I’m not a runner like that. I don’t care if I pass you. Besides, stopping to take photos to share with my bloggy friends is way more important. Aint I nice! (insert your approval here!)
I made it back to the finish feeling good. I could feel the week’s training during the last few kilometers but overall I felt great. This was good time on the legs. I finished in 2:15 and was happy. We received a medal in the form of a key ring. 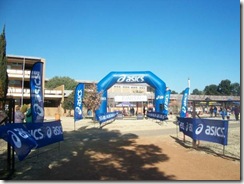 I felt happy when I finished. 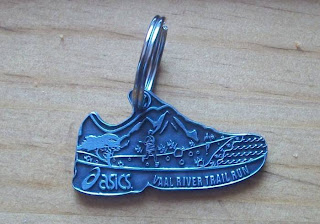 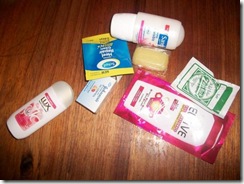 Some giveaways.
This was certainly not the most spectacular run, but for me the course was interesting. I enjoyed the river and all the different terrain we ran on. The pollution in some places was the biggest negative for me.
Have a great week everyone!
Posted by Johann at 16:47

The race looks very nice and I love the picture of the river. Thanks for sharing!

It does look like a really neat variety of surfaces to run on, and some really pretty areas. I love that stream crossing!

YES, of course you're a very nice runner! And as a beneficiary of the pictures, I appreciate that. :)

There's a trail here that goes along the Mississippi River. Some parts of it aren't nice at all. Very polluted, trashy, and industrial. Sad. Usually if we go for a hike with our kids (though we don't hike there), we'll take a grocery sack and pick up trash along the way.

Thank you so much for stopping to take pictures for us.
Certainly an interesting and varied course.
Happy running my bloggy friend while I am gone and thank you for your support.

congrats on another race!

The photos are always appreciated! Maybe in ensuing years the organizers could include a river cleanup as part of the event?

I really appreciate your pictures and am grateful that you "aren't that kind of runner".
I love seeing how we see such different things on the same race. I am so glad that you at least got to see the Vaal River.

We totally appreciate and love the pics!
Nice race!

Congratulations on another race! Looks like some lovely scenery on the trails.

I can't believe Staci is running in sandals in that heat!

Good 20 km race! Taking photos is more important, I agree with you! Your beautiful report shows that it was a pleasant race although the temperature was down to -2°C.

I hate water pollution, and I don't understand why police sometimes have better things to do than to search for environmental crimes.

Nice job! What a beautiful area to run! I don't think I would have liked running through that mud!

Thanks for taking the pics! And I do love the medal. That is an awesome idea to make the key ring.

Liewe aarde! That run through the mud is quite something. It seems like a really fun kind of activity since you enjoy it. I think I would struggle a bit, as my feet got heavier and heavier. Love the key ring medal. WIll catch up on the rest of your blog, but wanted to say hello again, and see what you've been up to.

Nice review Johann! I particularly like your sunrise photo. The briers along the trail look pretty nasty. And my feet are now cold from seeing your sandal-clad friend in -2 C temps - BRRRRR!!!

Great Photos! Love the river. Too bad about the pollution. We have it too. I also love it when runners keep turning back to look at me, afraid I might catch them (they obviously don't know me). I'm still amazed how cold it is for you on your runs when I'm in the midst of heat training. Thanks for sharing!

That looks like a really tough course! You are so good to take pictures for your fans! Really nice medal/key ring.

Staci's feet looked cold!!
Good race Johann. You always seem to enjoy it so much. I guess that's why you keep coming back for more.

You were very kind with those 2 "runners": a racing gentleman.
It was better for us too because you had more possibilities to take pictures to share with us.
It looks like an impossible path to run through but nothing is impossible for you.

It may not have been the most scenic, but the course sounds really varied. The stream crossings look fun! And I love the medal :)

You ARE super nice, I love that attitude. I also love the sandal girl but it's a good thing she didn't tackle the mud with you!!!

You have a great attitude and I love that you take photos along the way :) Congrats on another great race! I must say the sandals must not have been so great in the mud...but, I admire her for wearing them through all temps and various terrain :)

I always enjoy your photos, Johann! Thanks for posting them :)

OOh! that thorn bush looks nasty! I might enjoy mud-hopping!? Too bad about the pollution...:(

im with you about those two guys johann. unfortunately we all meet them now and again. for u the long game is different

Great job - I enjoyed to blue blue sky in your pictures. And I think a key chain instead of a medal is a great idea!

thanks for taking the pictures!

First off, YES, you are awesome to stop and take pictures for us overseas folks. Thank you, always love your pictures.

You love mud? Ugh. I've lost a shoe or two in that stuff, yuck.

Funny about the guys not wanting you to pass them :).

Nice job on the race, love the keychain!!

And, btw, my heel is good - thanks for your concern. In fact, my PT was excited I recovered so quickly whereas a few months ago I was not. Progress!! YAY.

Have a great weekend, Johann!!

Another good (and well-documented) race! Congratulations! There seem to be plenty of trail races in South Africa with beautiful scenery!

What an interesting variety of scenery! And one of my favorite runs was also one of my coldest.

I like the key ring idea for a medal.

Great job on another great race!!

Ain't you nice : ) Thank you for stopping to take photos for us! Some of the trails you run look just crazy! That downhill and the stream crossing. I am so impressed that you can do that! Have a great weekend!

Nice job and beautiful pics. It's sort of refreshing to me to be reading about somewhere that's cold as I swelter here.
Nice medal!

Thanks! I love all the photos. Glad you stopped to take them.