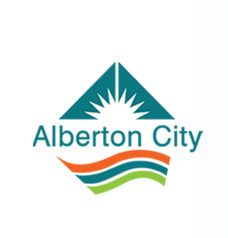 Yesterday morning I ran the Alberton City Half Marathon at the Alberton City shopping mall. I live in Alberton, Johannesburg, so this is a local race hosted by a local club and therefore I like to support it every year.

It was a chilly morning so most runners waited indoors before walking to the start. The local coffee shops and restaurants failed to cash in on this which was mind boggling to me. 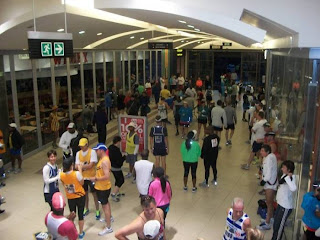 I think it was the coldest morning so far this year and many runners chose to wear more clothes than they’ve done previously this year. I don’t feel cold very easily and opted for my running vest only.

Waiting at the start... 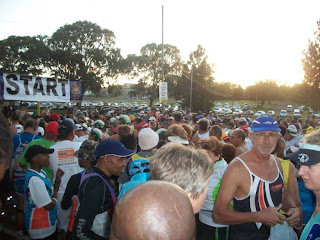 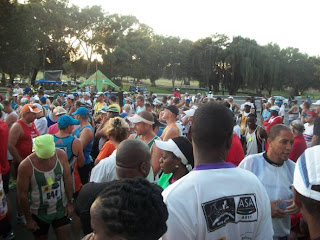 The race started on time and I was off and into a nice stride very quickly. I wasn't planning a fast run and used this as a training run. There were a lot of my friends running and it was a nice social affair right from the start. 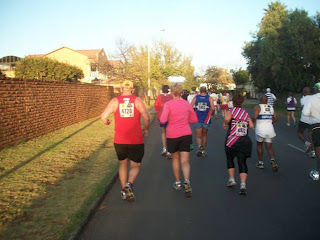 Shortly after the start.

The race runs through the suburbs of Alberton and can be seen as a moderate to easy course. My plan was to run around 2:20  and feel good afterwards. 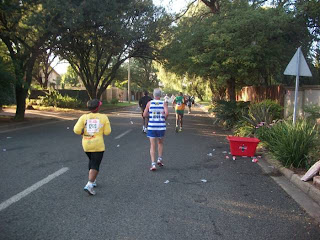 Typical scenery throughout the race.

The photo above really shows a typical South African neighborhood. Lots of trees with high walls lining the pavements.

There were a few testing hills along the way but no serious heart breakers. I felt good although my stomach was complaining about the huge lamb shank I ate the night before. This was a training run so I did not do anything race specific before the run. 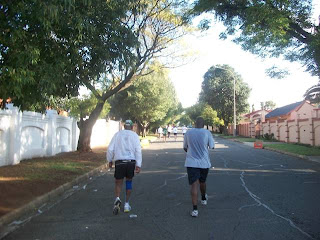 Short walk break on the hill.

As always I only found my comfortable pace and rhythm after 7km. I think it was actually closer to 9km this time with the heavy meat making my stomach felt three times bigger than it is. 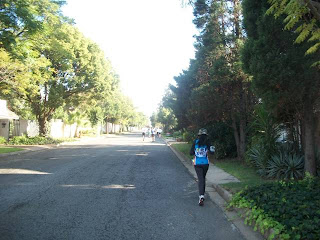 At some point we ran through a security estate. This is also typical of South African neighborhoods where the people will pay security companies to close of streets and create only one or two entrances into the area. These entrances are then guarded and monitored by the security company. This is then supposed to keep unwanted characters and burglars away from the houses inside. 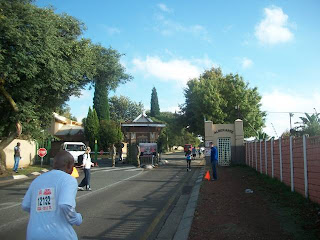 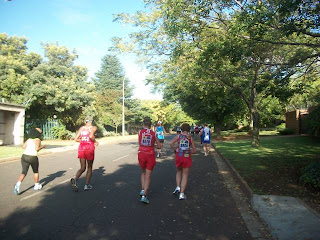 I met up with some of my very old running friends at about 15km. They are the  runners in red on the photo above. They run for Roodepoort Athletic Club. This was my  club form 1994 to 2003. We enjoyed some chatting and jokes and then I settled in just behind them to the end of the race. 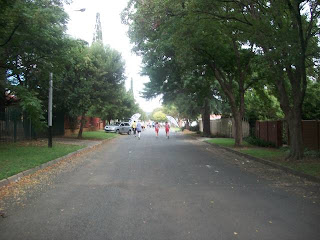 With 3km to go I was feeling very good with only my stomach giving me a hard time. I really felt that I could have and maybe should have run a bit faster but I was still happy as I knew I would run close to my goal of 2:20. 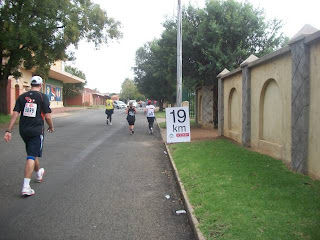 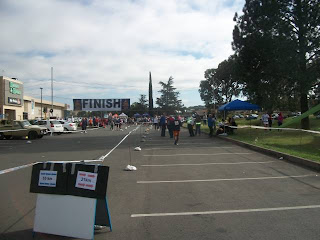 Into the finish area. 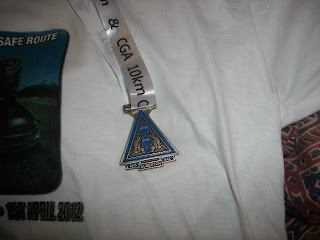 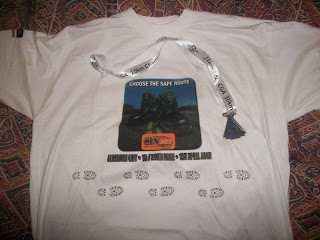 This was a very nice and very well organized race and I thank the organizers for everything. I did exactly what I planned to do even though my stomach felt very heavy during the run.

Next up is a 25.5km run this Saturday with the SlowMag Half Marathon on 15 April. This will be another training run with a target of finishing closer to 2:15.

Have a good week everyone!

I always enjoy your photos Johann - getting to see how other people live in other countries. Well done on the run.

Nice running Johann. Must have been good lamb if you still feeling it the next day :-)
Alan ran his slowest half marathon there yesterday, said it was very cold!

Awesome report! Sounds like your plan is coming together!

It's alway interesting to me to watch in your blog and see how opposite our weather is. I just had a very social race, too, with it being local and hosted by my club. It makes the race even more fun, for sure. :)

Great job out there! I hate it when my supper rebels against me in a race, but it sounds like you pushed through it. Congratulations to Annette on her 5k! I know I say this every time you mention he, but I love the way you guys have made running into an "us" activity, even though she doesn't run as far as you do (yet). I thought about that this weekend, as my husband skipped a race that was literally 5 mom from our house.

Nice job. And I like the footprints on the shirt, very cool

What a beautiful race with a lot of runners! Good race, Johann and nice report!

Congrats! What great pics and thanks for sharing....

Glad you had a good race (despite heavy stomach).
I love seeing pictures of how people live in other countries. Thanks you for your commentary on those. I may never get to see SA with my own eyes so I am enjoying your pics a lot.
Nice finisher's medal.
Next year don't run that race. Just open a small coffee stand at the start. :)

Nice work Johann! Nothing better than meeting a goal. Sorry about the stomach--that's always frustrating!

My husband is coming to your city next week. I really, really wanted to go too, but I wouldn't be able to do Boston if so, so I had to miss the chance (this time!).

Ugh, sorry about the stomach...been there a few times and it is no fun (though not due to too much meat, meat isn't one of my favorites). Still, you hit your goals even with the stomach being crazy so that's great!

Love the medal, it's so unique. And the shirt with the little running feet is really cute!

Nice job, Johann. Hope your wife had a great run!

Great job on hitting your goals! That is good training right there.

Sounds like an excellent local event. I like when they start the different distances separately to allow for more space on the road.

Congrats on finishing right where you wanted to!

I do like the medal and the t-shirt.Sorry for your stomach trouble!

Ugh - running on a full load of lamb shank sounds frightening! Nice report as always - and great to hear about the whole family getting involved ;-) So what is on tap to replace Pikes Peak this year? Of course, the mountain will be here whenever you get to come over to the states!

Thanks much for all the photos. It's so interesting to see what things are like in your neck of the woods. Quite different from here but similar to other countries I've visited where security is a bigger issue. Looked like a very nice course.

Too bad about the stomach but at least it didn't keep you from finishing the race - and right on your goal time too!

It was interesting to see the "secure" neighborhoods are just like normal neighborhoods. I get the impression you don't feel it's really necessary to live in one of those!

Great to see the photos of your country and where you run. Thank you for sharing. Well done on your "training" run. You did well - hope your poor stomach settled down eventually! Love the medal and t-shirt:)

Nice execution of your race, Johann :)

Your photos of the security neighborhoods- there are some of those here too, but not any where I live! Here we call them "gated communities" . They are generally more upscale.

Nice to have Annette at the finish! Nice medal too :)

Fun, fun, fun! I especially love seeing the pictures and comparing to my area. So funny how these pictures could be taken right here in the U.S. Except for: I don't see any sidewalks. Perhaps it's just the neighborhood that this race took place. But we have a a strip of cement pretty much everywhere where I live, that runs adjacent to the curb that walkers use. When I used to run road races, I'd use the sidewalks to get out of bottle-neck areas. You may have sidewalks in other parts, just curious if it's a U.S. thing. By the way, congrats on yet another race!!

A very good report with many interesting photos to learn more about your wonderful Country. A trip there is always in my wish list if only my wife were not scared to fly.
Sorry for the stomach problems but you reached your goal. Now another half is under your belt, another medal in your collection and another shirt in your wardrobe!

Great run, one of the pictures looked like one you had posted before!
Have a nice week!