This race started at 6:30 only because it is getting colder and darker here in Johannesburg. The morning did not disappoint and it was quite chilly when I arrived at the venue. I was surprised at the huge field and there was a long queue for people that still needed to enter the 32km (20 mile) race. The queue for the 15km race was much shorter.


Time always flies before a race and soon I found myself waiting at the start between all the runners. 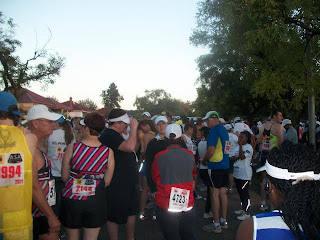 Staci from She Runs In Sandals spotted me and came to say hi. She also showed me her flag she was running with for the International Running Flag of Friendship. 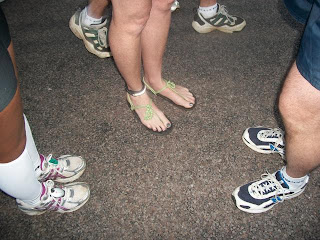 Yes, she really runs in sandals!

The start was a few minutes late but we were still chatting when we heard the gun and all the watches beeping around us. Another race on the go… 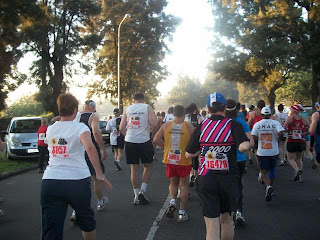 Lots of runners, don't fall!
I was wondering how I’ll feel after last week’s 60km so I was happy that I felt really good when we started. I knew I would feel all the training at some stage but as long as it is just tired legs, I’m happy.


The race doesn't follow a very scenic route and runs through the suburbs with some light industrial and commercial areas as well. The 15km and 32km runners started together and we ran the same route to the 9km mark where the 15km runners turned away. Comrades is clearly getting closer as most runners continued for the 32km. 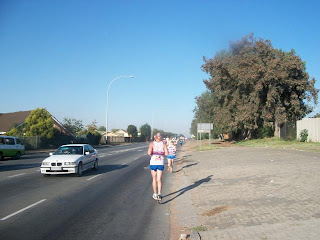 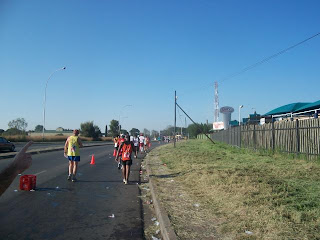 The race description warned that the second half was really tough and this was certainly no lie. There were some testing hills and I wondered how long before all the long runs will start taking its toll on my legs.


Some testing hills in the second half... 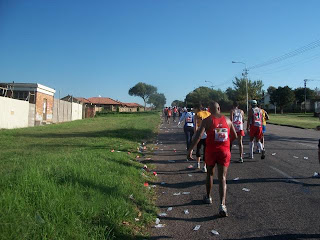 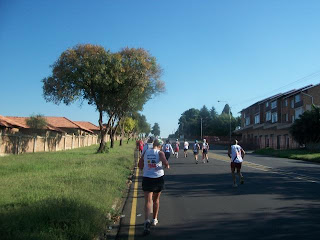 Sure enough, at about 23km, with 9km to go, my legs started telling me they were not 100% happy with the way I was treating them. I think this had a lot to do with the course as many runners said afterwards they suffered the last 8 to 9km.


My camera also decided to take it easy at this stage and wouldn’t work between 22km and 28km. I think something must have been wet because it worked fine again for the last 4km. I, on the other hand, was not working so fine the last 4km. 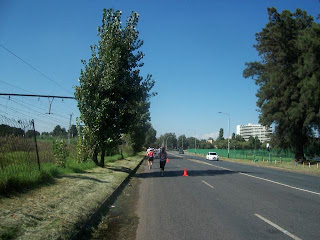 The last 2km had some nice shade for the tired runners... 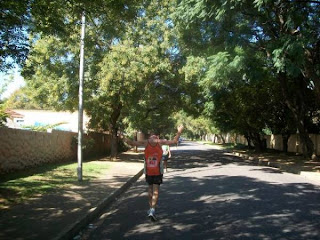 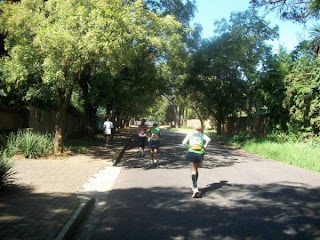 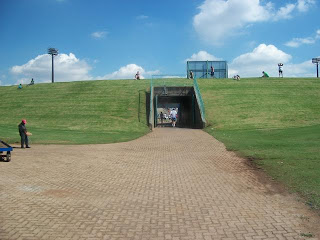 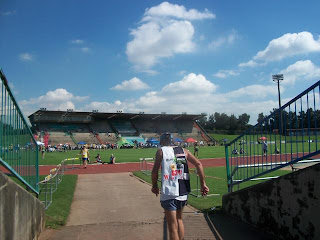 Then it was round the field on the track to the finish. 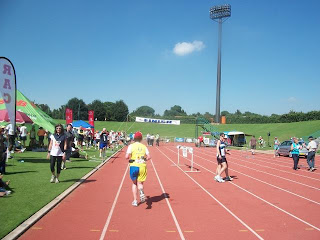 People think it’s very funny that I slow down to take a photo before the finish.


Although tired, I was very positive. Pushing through on tired legs is what ultra running is all about. I was doing fine with that and I had only tired legs, no pains or injuries anywhere. This is good for this stage in my training. Only three hard weeks left and then it’s time to cut back for Comrades.


One of our club committee members took this photo of me finishing...thanks Mark! 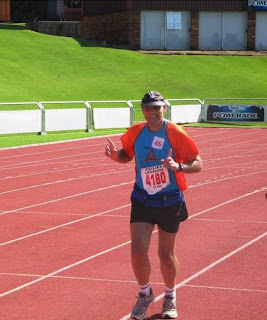 I'm tired just reading it. You are amazing. It is funny that you slow down at the end.

You are a mad man! I love it! You have the best attitude toward running and racing. Excellent job.

I love that you get that last photo for us to see [finish line]. It's awesome.

Another. Awesome. Race. Report. And. Run!!

Another amazing run Johann! You are phenomenal! :)

I love the big smile on your face as you finish! Clearly you can handle the pain and will be ready for Comrades!

Johann, you are so ready for the Comrades. I admire how you can just mentally battle your legs (and the camera :) ) and win. I wish I had your mind.

Another great run, Johann! I'm glad you reached a good stage in your training.

Your post inspired me. So, next Sunday I'll run a 13 km race in Roma with my camera, as training.

You're looking happy to be done! Congrats on pushing through. That shade must have felt heavenly in the later miles!!

I really appreciate that you take time for photos.

Nice job!! and great pictures! Love how you can manage to run and snap pictures at the same time. You are so ready!!

Well, not as scenic as your trail runs but you got some shade just before the track, which I'm sure helped you mentally! You're going to be so ready for Comrades!! :)

Great pictures - you are amazing! I saw a runner at a race here with the same sort of sandals as Staci. Kind of interesting as they don't look like they would be good for running but they obviously are.

Look at you rocking that finish!

Even if the last 8 or 9 km were tough, that is still really impressive. Looks like all your hard work is paying off!

I love all your pictures. I'm glad you manage to get so many. Thank goodness for shade, huh?

I love the finish on the track. Seems like it would be cool to run through the tunnel. I'd tried to convince my brother to do the Kentucky Derby marathon with me, and you get to run a lap at Churchill Downs (where the derby is held). Sounds like it would be neat. He didn't like that plan though, so instead I'll be heading to Wisconsin to run with him.

I love all your pictures. I'm glad you manage to get so many. Thank goodness for shade, huh?

I love the finish on the track. Seems like it would be cool to run through the tunnel. I'd tried to convince my brother to do the Kentucky Derby marathon with me, and you get to run a lap at Churchill Downs (where the derby is held). Sounds like it would be neat. He didn't like that plan though, so instead I'll be heading to Wisconsin to run with him.

Man, you're a machine. I feel like you race every other day!

You are smiling at the end - that's what counts! Good one on a tough day - enjoy these last few weeks of torturing those legs before the taper. Have a great week!

Woohoo! Only 6 weeks to go. I spent some time on Saturday running with my friend Andrew, who's heading over to do Comrades. He did a 33k run Saturday then backed it up with 25 on Sunday. I think you're both insane (but in a nice way)

Congratulations on another finish! Great pictures. And I love how you end in a stadium -- so dramatic! I've never run a race that ended in a stadium. I also can't help but take pictures during races. I have a short race this weekend that I've promised myself to leave the camera behind (for the first time in a long time!)

Congratulations Johann! Another great race for you! Love all the pictures! :-)

Great report and so cool that you found someone to snap a pic of you at the end! I think it's great that you run with a camera - I've thought about it, but never have - I will definitely try it! Great job!

I love how you are so happy still after that long run. Great job Johann!

WOW just what I was looking for. Came here by
searching for food to lose weight
Also visit my web blog ; healthy diet plans