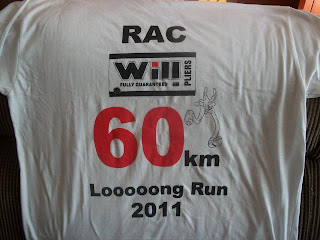 The RAC Long Run is not an official race but a 60km Comrades training run hosted by Rand Athletic Club in Johannesburg each year. This was the first time I decided to do this run as it has never fit into my training plans before. I Googled the run and found this description by someone who ran last year:


“The RAC club organizers seem to be a special kind of sadistic.  The run seemed to climb forever and as we got to the last 20 km it just did not stop, hill after hill rising until the end.”


This description is 100% accurate.

The run started at 05:00 so it was another very early morning. This is all part of Comrades/Ultra training. You have to get used to getting up at 3AM and then go run for the rest of the day. It’s not only about the running; it’s about being awake, active and on your feet for many hours. 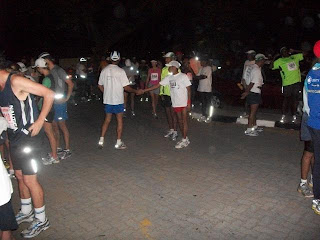 Waiting for the 5AM start.
The first part was very dark and I just settled into a steady rhythm. Today was not about time, only about distance. I also wanted to experiment a bit with fueling and a gel/liquid combination. 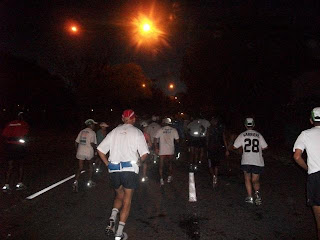 Running in the dark.
I felt good and concentrated on holding back and saving energy. The run took us through many familiar areas of Johannesburg and I enjoyed the sightseeing on foot. There were some serious hills to deal with right from the start but the worst hills were towards the end of the run. 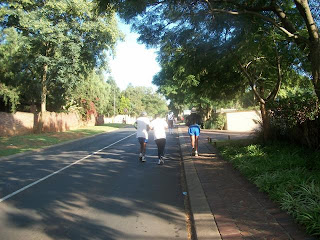 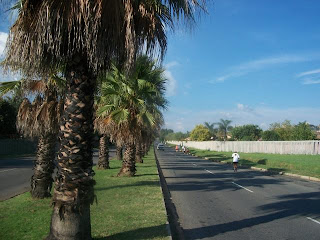 Sightseeing through the suburbs.
It became quite hot later on and everyone was taking a bit of strain. Because we had to share the roads with traffic I opted to run on the pavement most of the time. This was great as many parts had no pavement and only some “trails” to run on. This kept me entertained for many kilometers and I loved not running on the road all the time. 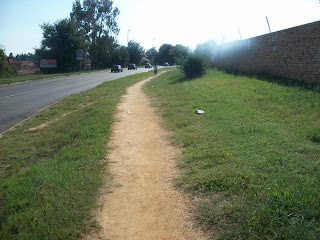 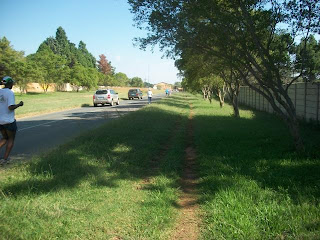 Running on the "trails" was great entertainment.
Towards the end I saw Sandal Girl’s (from She Runs in Sandals) husband at the water points and he gave me some ice that was just the right thing to keep me going. He said Staci was moving along well and would finish her first ultra distance run. Well done Staci! 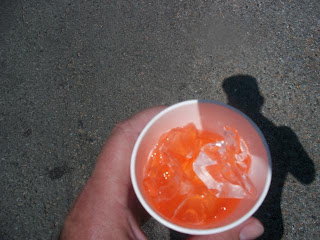 57km done, 3 to go...heaven on earth!
All in all I had a very good run with no problems. I went slowly and the hills towards the end were killers, but this long run was a total success. This gave me a good boost for Comrades and the heavy training still ahead. 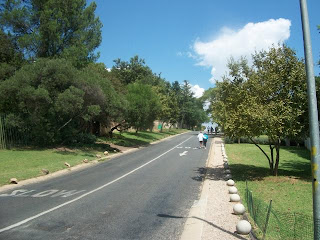 Some killer hills towards the finish.
I thank RAC for hosting this training run. It was well organized and I will be back next year if it fits into my training plan. My Comrades training is well on track.

Have a super week everyone!
Posted by Johann at 17:49

All I can say is WOW!

The trail must have felt like heaven to your feet. Great job as always.

Great idea for a training run. I also like running on the "trails" during road races. Good luck on Comrades!
...Mike

Nice job, Johann - you're going to be in tip-top shape on race day!!!

This sounds like a great race with a very good support system all throughout the training period. Maybe someday I can try and do this race. South Africa has always been on my wish list of places to visit. Good job with your "crazy" training run!

You are a machine!!! And I love that shurt

That is one serious "training" run - great to have so much support. Congrats!

Amazing, Johann! Here I'm complaining about being on the run for 4 hours on a training run! :) You've been so consistent with your training. I love that you were still up for the run after that very encouraging blurb. It'll only make you stronger for Comrades, right? :)

On another note, my son is doing this project at school (Flat Stanley) where they mail a cut-out to a family member or friend and then the person takes pictures with Flat Stanley and writes back a little about what Flat Stanley (the picture of a boy) did while "visiting". I kept telling him, "I have a friend in South Africa! You could send it there!" but he wanted to send it to Hawaii instead. Booo.

Your report shows that the running path was beautiful, although there were a lot of hills :)
Great 60 km race, Johann! I'm Glad that this "RAC Long Run" improves your Comrades training.

Nice run for you...and what perfect training. Such great places to train and run!

Nothing like ending a hard run with a lot of confidence for what is ahead!

What a great idea. All of you have to run a really long run around now so why not do it together?! The hills sounded unpleasant but isn't Comrades uphill this year so it's probably what you needed.

And fancy you being an ex-vet too. Small animal? Farm animals? Exotics?

What a description! Glad you were able to do the training run this year- sounds like a great experience and a confidence booster too!

Nice run - the cup of ice looks rather refreshing at the end of a long run!!!

Wow, I so admire you for doing those loooooong distances! I can't wait to hear how Comrades goes for you.

Way to go Johann. It was a great day - very well organised and I had a lot of fun. Great to see your pictures.
See you Sunday.

great stuff. You should be in great shape for Comrades. I hope to get there in 2013.

Wow, that ice must have tasted wonderful, after your story I felt thirsty and ready for that ice!
Nice work, I bet you are counting the days until Comrades!!!

Sounds like it was a good day to run! and it looks like there were a lot of runners out there. it's great that they are able to organize a training run for everyone. Sounds like your training is going well, that's awesome!

I cannot imagine doing a 60K training run, but it's great that there was so much support and company! Way to go!

Nice long run. Your right, long runs are such a confidence booster for the body and mind. The hard training will pay dividend come race day.

Sounds like you're putting yourself in the best position possible to conquer Comrades. Those hills look like killers!

Way to prevail in tough conditions. You'll be more than ready for Comrades.

I agree with tahoegirl: WOW!! I need to make peace with hills. You are not only at peace with them, but you own them. Comrades...here you come!!

Amazing! I can't even fathom running that long. Seriously, my brain can't comprehend it. You are awesome!

What a great training run and good to hear your training is on track!

That is a serious training run...you are in such amazing shape!

Thanks for your honest feedback Johann. I have thought about the shoes as the possible problem, but to be honest, I've managed to avoid lingering knee or hip or piriformis pain since I run in them. Plus, all my injuries seem to stay away once they heal. Sigh. I just don't know. Maybe I do need more support, but I think a big part of the problem is my fragile muscles (from corticosteroids). My 23K was my longest distance ever, but I had a cold and it took me forever (3 hours), that's a lot of time on my feet and may be the reason for the injury.
Sorry for this long comment, I'm just so new at this that I don't know what to think and I guess I'm thinking out loud. Thanks again, I really really appreciate it and will talk to my PT on Tuesday (I was going to anyway :)).

What does the rest of your day consist of after something like this? shower, ice bath, nap, extra large pizza? :) Wow! Thanks for the comment on my post...so glad that at least a few people got something out of it.

You are a running machine! Not only the hill, the distance but also the dark and the early morning.

Congratulations on a strong training run. I'm so glad you are getting these confidence builders to help prepare you mentally.