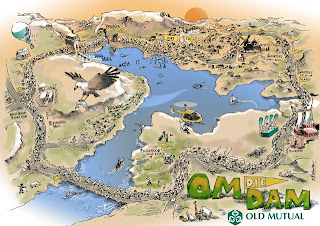 Saturday I will be running the Om Die Dam 50km Ultra Marathon at the Hartbeespoort Dam in the North West province of South Africa. “Om Die Dam” translates to “Around The Dam” and that is exactly what this race does…it runs around the dam.

It is one of South Africa’s biggest ultra marathons with more than 7000 runners. It is a tough run with some very tough hills and usually very warm. I haven’t run a 50km race on the road for a long time now so I’m really looking forward to it. My goal is a comfortable finish, ready to continue normal training the week after. There is a generous 7 hour cutoff so no need to hurry and damage the body. I will rather spend some valuable training time on my legs, while enjoying one of the better ultras around.

Below the race description from the South African Runner’s Guide: 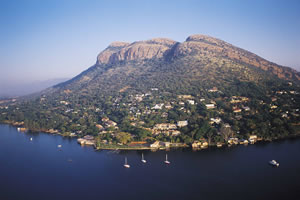 Which one, oh which is the most beautiful, which the hardest? Om-die-Dam is a difficult race, let us be clear about that. But it is also a beautiful race. Compared to many other famous ultras, it is often the one that sets the benchmark.

The race starts off in an easy and orderly fashion as it leaves suburban Hartbeespoort and goes alongside the dam for the opening few kilometres. A run through the tunnel is always punctuated with wolf-whistles and cat-calls. This adds to the atmosphere of bonhomie and does little to detract from the magnificence of the triumphant arch-like structure that straddles the dam wall.

The first item on the agenda for today is to climb the opening of several challenging hills. Commando Nek comes early on in the race and, while nuggety, it should pose little difficulty. It was on this nek that Boer General De la Rey positioned his commandos, effectively cutting off Rustenburg from Pretoria.

Once over Commando’s it is relatively easy going as you cross the long bridge over Hartbeespoort Dam. This is a very beautiful stretch, with the sun rising and reflecting with a dramatic splash on the calm water below.

Next comes the long and steady climb through Broederstroom, past Pelindaba. The African Nuclear Weapons-Free Zone Treaty, known as the "Pelindaba Treaty" was adopted here. This section of the race can be very hot and the organisers go out of their way to lay on excellent water tables that offer all sorts of refreshments, such as fruit, ice lollies and even miniature wors rolls!

The race earns its reputation as a tough customer at Saartjiesnek. Around the 36-kilometre mark lies this punishing two kilometre or so monster. Each great ultra possesses a legendary hill. It is at this point on Om-die-Dam where reputations are made or broken. Shoulder in and run, let Saartjie make you the hero today. The top of Saartjies has its own reward, for glittering below is the most breathtaking and panoramic view of Hartbeespoort Dam.

Some of the final stretches are quite easy. Beware the sting in the scorpion’s tail, this one is brutal and can reduce even the strongest to a walk. A cautionary note – the event is run in March and in the North West it can get very hot at this time, so drink plenty of fluid on the route.

Om Die Dam Ultra Marathon
Have a great week everyone!
Posted by Johann at 13:38

Wow! The description for that race is surreal and beware of SCORPIONS...yikes!

Have a fantastic race Johann...you are such an inspiration!

Speachless! that photo is really cool!

That sounds right up my ally Johann. Hope your week goes well and that you can get rested up for the race. I can't wait to hear all about it! Cheers and have a super week of training!

Looks like a nice race - aside from that scorpion's tail... Have a great week in advance of your race Johann!!

Wow, a great lookin' race! I hope you have a great time!

Looks like a fantastic race I'm sure you will enjoy every step. I'm attempting my first ultra the same day but i have a feeling i won't enjoy it as much as you will :0)

Sounds like a great race and a good plan! Enjoy!

That's a great promotional poster! Sounds like a good time to be had - enjoy!

That looks like a race I'd really love to do (well, if the heel were working that is)!! A 50K on the road will be tough, but that course's beauty will be well worth it. And fun :). Have a blast!!

Big dam! And some pretty big hills! Should be a challenging race.

You are going to run through a nice envinronment although the tough and hilly path. Beautiful photo!
The chart of the race description shows that the Om Die Dam 50km Ultra Marathon it's a challenging adventure. I hope the weather will be not too hot.
Have a great time!

Post scriptum: Martin, a blogger friend from France, yesterday wrote that the French are not happy about the rugby match. On Saturday, 19th March, we'll see Scotland V Italy!

Scorpions?! We get tons of scorpions. yikes.

Good luck. That is a lot of racers.

That is going to be a big race, but also sounds like it will be beautiful! Looking forward to reading about your experience. Enjoy it!

I'm doing the 21 but might just extend the distance to 30. Hopt to see you there.

Wow! that is impressive! But I know you are going to do well. Have a great time!

Looks and sounds beautiful! Hopefully the heat won't be too awful and you'll be able to enjoy your time on your feet. Those hills look pretty brutal...you're one tough customer. :)

GOOD LUCK!! I am looking forward to reading your race report!!!!

looks nice and hilly to keep the interest (and the challenge) going. gook luck johann!

What an amazing sounding race. I love how you start in the suburbs but then there's the tunnel before you hit the dam. Wow.

Good luck, Johann! I'll be thinking of you on Sunday!

Comfortable finish is a wise goal, good luck.
Even if tough the race looks beautiful.

What a beautiful and challenging course! All the best to you Johann.... can't wait to read your recap! Have fun!!!

Have a GREAT race, Johann!

Kill those hills! Enjoy the beauty of the course :)

Those look like some gnarly hills. I had to bag my trail 50K next month, but it's okay. I'll do one one of these days. Have a great race Johann.

Vasbyt, sterkte, en pasop vir die slange! I can't imagine what running around that dam must be like. Yes, I remember the Hartebeesport dam from long forgotten geography lessons......Wow, sounds as though it is going to be a terrific course.

oh wow, that one last climb looks like a doozy, Good Luck this weekend!

Oh man you know it. Cupcakes are better then cake though. :P :P Don't ask me why, I wouldn't know.
Hope your training is going splendid!

I love that description!

I think the Spartans read this before all their victories with Athens!

Looking forward to your report.

Wow, that sounds and looks brilliant. Hope you did really well Johan.I love a tough and challenging run.