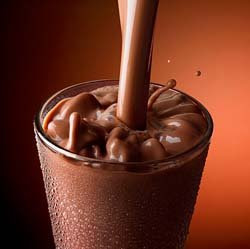 In a recent Runner’s World they had a few “what is the best”, “who is your favorite”, “who is the best” questions that were put to runner’s and gave the answers that came out tops. One question was: “What is the best recovery drink?” The answer was chocolate milk. I was surprised when I saw this but very happy as well because I’ve been drinking chocolate milk for many years after a bad run or a race where I dehydrated badly. In 1996 I ran a 54km race in the heat and dehydrated completely. This is what I looked like at the finish. 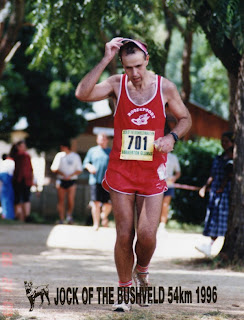 Luckily I traveled to the race prepared. I took a dozen of my favorite flavored milk, Super M, with me. I drank 7 bottles of chocolate and 2 bottles of strawberry milk and recovered well and quickly. This was not the first time I’ve used chocolate milk to recover, but this was the worst condition I’ve ever been in after a race or run.
Over the years I’ve always craved milk or some form of milk drink when I dehydrated or started feeling nauseous on a run. A Fanta Orange float is a favorite as well. However, chocolate milk has always been at the top of my list followed by some strawberry milk.

During my last marathon there was a problem with water on the route and I was handed drinks by my family who was driving the route. They also helped many other runners in trouble and later on I had to drink whatever they had left. In the last 10km I drank to bottles of chocolate milk and a glass of water. It was only later that I realized I felt bad between 25km and 32km and much better the last 10km. Did the milk have anything to do with my recovery? I think maybe it did.
I recovered very quickly and didn’t feel sick or anything during the last 10km. I’ve always had the milk after a run and never while running. I’ve always thought I will get sick and throw up if I drink milk while running. This didn’t happen at all. I ran a good last 10km on chocolate milk! 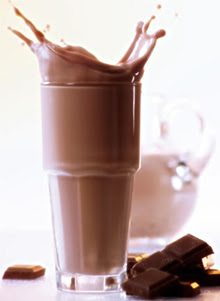 Now I’m wondering if I should try this again on my next long run. Maybe I should have some chocolate milk for the last part or when I start feeling bad. I’m planning a 35.5km training run for the Easter weekend and think I must try some for the last 7km. If this works well I’m thinking of taking some with me for my next long race. I’ll be running a 50km race on 17 April. On this race, the Loskop 50km, the road is closed for all traffic so I won’t have anyone to hand me milk. If I want some I’ll have to carry it with me. I’m thinking of using my hydration pack for this. Maybe I can fill it with chocolate milk and ice cubes and then only use it when I hit a bad patch or in the last part of the race. Well, I’ll be experimenting with this a bit and will let you know what happens.
For now, I’m recovering quickly after the marathon and will be back to normal by the end of the week. No long runs this week though. Only 15km for Sunday and then a hard 87km week next week with 35.5km next week Sunday. This will be followed by a half marathon the following Sunday and then the 50km race on 17 April.
Have a good weekend everyone!
Posted by Johann at 10:57

Hey Johann, I remember you craving Fanta Orange floats when we were walking the bush in the army! The milk still do the trick, that's good! Keep well!

I've been drinking chocolate milk after finishing my long runs for a few months now. Nothing tastes better after that kind of exertion! Haven't tried it during a run, though. Glad to hear it didn't upset your stomach.

Hi Johann,
There are so many runners that enjoy chocolate milk after training and races! Mmmm, it tastes so good:) I hope that you have an excellent weekend Johann!!

I love milk - even though I'm lactose intolerant. It just seems to hit the spot! I'm going to have to try it with chocolate now. The Fanta Orange floats sound great too. That's the only soda I'll drink.

Iim interested in chocolate milk during a run. I had heard about it for recovery. How well can you clean a hydration pack? I would worry about not getting all the milk out and it becoming sour and ruining the pack. But I tend to worry about those food issues!

You are superman! I can't believe those runs you do! Amazing! I loved the picture...and that is what I look like after a 5k...I can't believe you ran a 54k!
As for chocolate milk...YIPPEE! I never heard that either...but I love a nice cold glass of chocolate milk after a hard run! I always thought it was silly...I guess it is more normal than I thought! =)

Hi Johann,
I think you're right. I read two years ago an article on "Running World" where the athor adviced chocolate milk or yogurt after races and hard training.
Have a nice training.

Must be the protein from the milk and anti-oxidants from the chocolate; they have been shown to aid in muscle recovery. However, I wouldn't recommend putting chocolate milk in your hydration pack. Remember, it's a "recovery" drink so unlikely to help you during your run. You're better off drinking water + electrolytes or sports drinks. Plus, it will be a pain to clean your hydration pack later and if it's not thoroughly cleaned, bacteria will grow in it!

i don't think my stomach could handle milk during a run but i always drink chocolate milk after a long training run. i also drink ensure during my ultra training runs. but just little sips, i don't chug it. i love milk, though!! this is gross but if i had adult beverages the night before, i crave milk the next day.