Sunday morning I ran the Joe Stutzen Half Marathon at the Wanderers club in Johannesburg. This was a very well organized race and I enjoyed everything about it. There were a lot of runners as there was also a 10km race, a 10km walk and a 5km fun run. The venue was busy early on and runners could even enjoy a Bokomo ProNutro breakfast before the start. 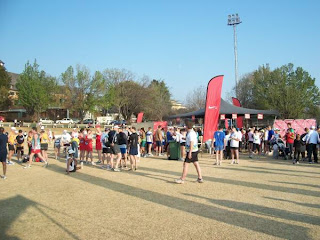 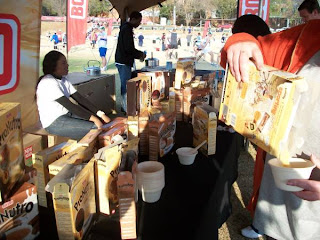 There were a lot of runners waiting at the start. The half marathon and the 10km started together and we ran the first 9km with the 10km runners. 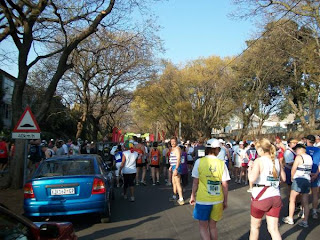 Getting ready for the start. 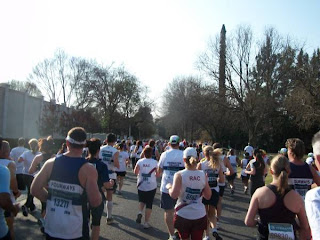 Lots of runners the first few kilometers.
This is not considered an easy 21.1km and there are quite a few testing hills on the route. I just wanted to run at a comfortable pace as this was supposed to be my first cutback week before my mountain race on 11 September. With this in mind I settled into a nice pace, not pushing myself at all. I planned to finish in about 02:20.

After a few kilometers I realized I’ll have to make a pit stop for a “P” break at some stage. I was a bit surprised as this hasn’t happened in a long time. I know from experience to just look for the first best spot and get the pit stop done with. The problem was that the streets in this area are all lined with very high walls around some very up market residences. 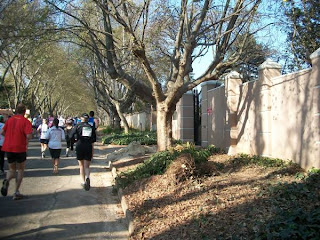 No place for a quick pit stop.
Nothing I could do, so I carried on longer than I hoped for before I could do the “P” break. Eventually I saw an electricity substation on the pavement and dashed behind it. I did look for any open wires before I did the “P” thing… 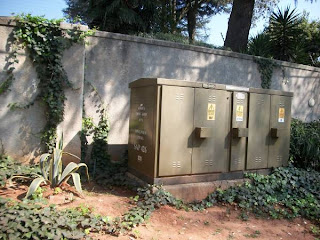 My “P” break savior, the substation.
After this I could really relax and I was having a wonderful run. I was pleased at how strong I’m feeling and the hills were no problem as well. I saw a few runners with this t-shirt and loved it! 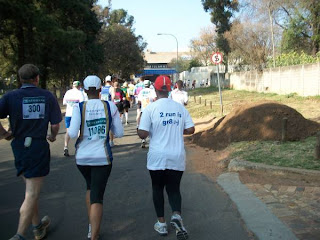 Great t-shirt…2 run is gre8 :)
When we came to the split where the 10km runners turned away I realized I haven’t seen any distance markers. I never look for these on a race like this but usually I would see a few anyway. So I decided to look for the next one…and there it was, bright and big, 10km done. How did I miss the previous 9…? Some suggest I was concentrating on the runners in front of me…I say I was just concentrating on my pace, running form, heel & toe strikes, shoes and so on… 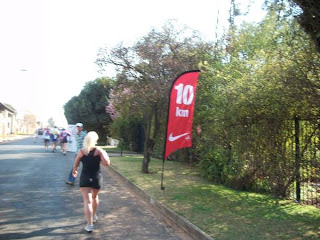 Between 11km & 12km we ran through a park which was a nice break from the streets through the suburbs. We ran on some grass and then onto a paved walkway. The park also included a steep little hill, but at least it provided a nice view over a dam from the top. 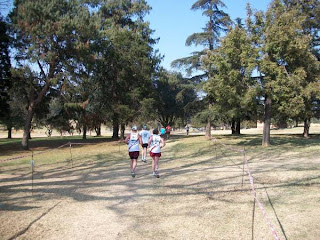 Onto the grass in the park... 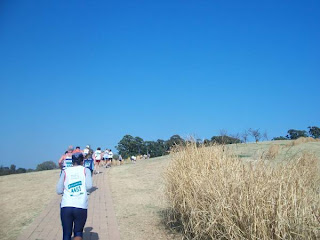 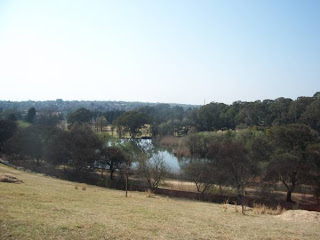 ...to enjoy a nice view from the top.
Then it was back onto the road and we joined the route of the 1st lap at about 13km. I was still feeling great and just kept going at my relaxed pace. I could definitely have gone faster, but kept reminding myself that this was a taper run. I’m not interested in any kind of speed or time at the moment. I have to survive a 50km mountain race in two weeks time. That’s the goal.

There are a lot of trees in this area and I was pleased to see many trees already showing off their new leaves after the winter. Spring is in the air! I could smell it and feel it. The rest of the race I just enjoyed a comfortable run in the lovely sunshine between all the beautiful trees. It was great! 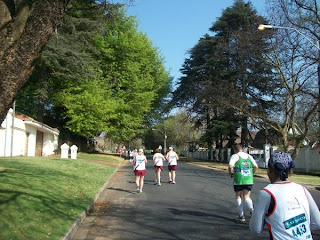 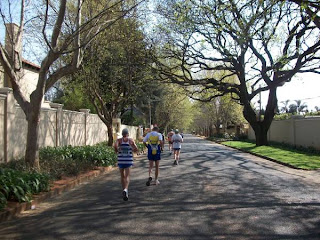 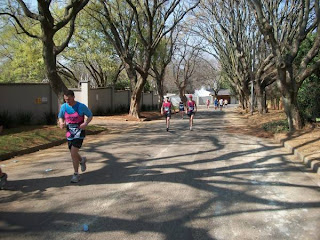 Before I know it we were past 20km and turned towards the finish where the 10km turned away earlier. The last km went quickly and then I was at the cricket field where the race finished. My son was waiting for me but wasn’t ready for a photo. He only got me from behind. 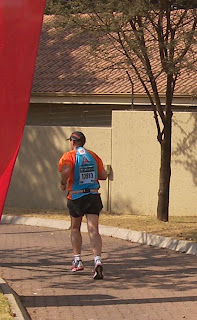 I planned a 02:20 taper run for this race and finished in 02:20:05. I never look at my watch during a race and never looked during this run either. My pacing was spot on! 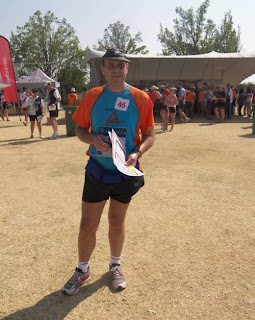 After the run…ready for another lap. 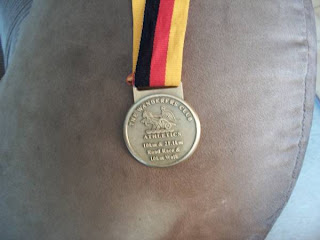 Medal for the effort.
This was a great race and Wanderers can be proud of the organization and the event overall. I’ll certainly be back for more runs here.
Posted by Johann at 13:04

Hi Johann,
You ran another great race/run! Thanks for posting all of the fantastic pictures! Pretty scenery:) I have had to pull over in just one race where there was no biffy....I had to use a big pine tree:) I am pretty conservative and proper so it was hard for me...I think it is easier for guys! I am really liking my half marathons that I just run easy! Nice work Johann! Hopefully your race next week will go well! Take care!

Wow! I am impressed with your pacing. You have some beautiful pictures as always. I will need to be running easy for awhile so like your attitude. I did a fairly good job not pushing it in my recent race.

Nice job! Only 5 seconds off of your goal? That is amazing!

Congrats! You did a great job with the pacing...impressive! What beautiful pictures once again :)

that is amazing about your pace! Love the tree photos, congrats on a great race!!!

Congratulations on a fantastic race!! Your ability to pace without a watch is very impressive. I love all the photos, thanks for sharing your great run with us!!

No…your son WAS ready…you were just that fast. Honestly, incredible pacing. You could’ve been a pacer for that one. Congrats.

When you need to pee you can't concentrate on such things as bright orange mileage markers!

That finish time was perfect - I don't think I could do that without a watch! I love it when things all go according to plan. :) Race report with photos were great! Congrats on the race and good luck with your training for upcoming race!

you are an incredible natural runner Johann!

Love the pics as always ... I wonder if you shorted anyones' power? :)

congratulations for a race well run. Perfect pacing to get you on target too! Nice!

I love missing mile (or K) markers in a race--makes it go faster. Glad you made it through on your goal time--you must have a great internal clock.

Nice race report and pics. Good idea to look for open wires before you did the "P" thing.

Man, you couldn't get your time any closer if you HAD looked at your watch :). Nice job on the taper run...definitely a different type of run than your mountain/trail runs, which makes it so fun. Great medal!! Congrats to you!!

Congratulations on a successful race. It's awesome that you finished at your goal time.

I love how varied the route was. I'm glad you finally found a place to take care of business. ::smiles::

I'm glad you checked the wiring on that substation before peeing otherwise your hairdo at the end would have looked significantly different.

Nice race Johann! It really is a wonderful thing to slow down and have an easy run. I find I enjoy the landscape so much more. Good luck with the next week or so as you get ready for the big one on Sept, 11. Cheers!

Seems the up-hill where you ran wasn't easy considering the photo which shows the view from the top. Nice report Johann and great race considering that you ran it as training before your mountain race on 11 September.
Next time you have to plan the “P” break :)
Regards

The electric substations are a "target" for most of us! The race, looking at the pic, looks very tough so you made a very good job. I like the hardware.

Nice report! Looks like a pretty and varied course. Good luck with your 50k!

Spring is in the air? Huh? Oh yeah, you are on the other side of the world. I always enjoy your posts.

Brilliant race and strategy! Well done on every aspect. Sounds like you have suffered no side-effects from that nasty fall a few weeks ago.
I hate pronutro, though I still eat weetbix, and the 'p' stop was so funny - especially if it was in the Sandton area!?

It does sounds like it was a great race. Love the tree-lined street near the end. Very cool trees.

You do look like you could have run another lap. :)

Johann. You are my hero.
I posted about my trail run earlier today [ignore the cherry on top post - - -blah, blah]

I have a whole new level of appreciation for what YOU do.

It was very interesting to read about this in your article. blood pressure