Back to Original Goals and 1000km for the Year

Although the 1000km is good I’ve made the choice not to run the 89km Comrades marathon this year and rather leave it for next year’s up run. This was my original plan but then they announced this year’s race as very special and I thought it was a good idea to give it a go. Entries had to be in months ago so there was no option to wait and see closer to 30 May if I would be ready. Well, I’m not ready. Maybe distance wise I’m OK but I’m not ready speed and weight wise. I would prefer to lose at least another 10kg (22 pounds) before I run this race again. This is me finishing the Slow-Mag half marathon two weeks ago…definitely far from ultra shape. 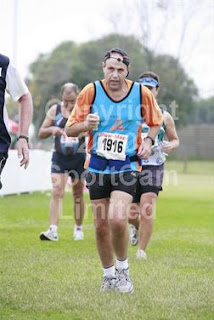 So I’m back to my original goals for the rest of this year. On a high level these are to run the Gauteng Winter Trail Series in June (4 races of 11 – 15km) and to run 2 x marathons and 2 x 50km races during the second half of the year. Between these there are other important races and I’ll write about them as they approach. The main goal is to be able to run a marathon and 50km comfortably by October this year. Then I’ll start building for the longer ultras. 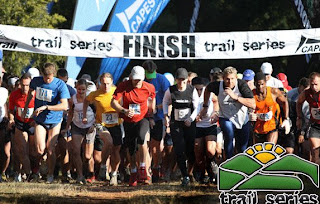 I’ve already entered the Winter Trail Series and will start the year’s trail running on 15 May with a 12 – 15km race in Pretoria. I’m really looking forward to do some trail running again. I’ve got three road races left before the first trail run.
On Sunday I’ll be running the Jackie Gibson half marathon. This is a hilly race but I need some good hill training anyway.
Have a great weekend of running everyone!
Posted by Johann at 13:36

Hey Johann, I am sure its disappointing, but surely the right decision. I am really amazed that you have so many runs to look forward to for the rest of the year in South Africa... you are lucky, and living in a runners paradise (unlike me)! All the best for your goals for rest of 2010.

Good luck with your half this weekend! How cool is it that you've done parts of Comrades before? I would love to watch that one (NOT do it!)

CONGRATS. 1000k already, you are crushing the runs!

Hi Johann....I keep seeing you pop up in the comments section of other blogs, so I thought I'd say hi!

Have a great race this weekend, and nice job so far with your goals for the year!!!

Hi Johann,
Great pictures...you are wearing my favorite color blue:) Good luck to you this weekend!! I can't wait to read all about it!! Have a great weekend:)

Good luck in your half marathon!

Hi Johann,
although I've never followed a marathon training program, I think that you've already reached a good goal with your 1000 km. From January until now you've run an average of about 65 km per week.
I hope that you'll enjoy on Sunday the Jackie Gibson half marathon.

over 600 miles already! I thought I was doing good -- but you must be completely insane!!!! :-) Keep up the great work ... you are phenomenal.!! 22 lbs seems like a lot to lose? But, whatever makes you feel better ... and faster. Sounds like you have your eye on the prize!