I’ll admit I was a bit skeptical about such a large field for a half marathon. 5000 entries…I had my doubts and I’m not a crowd fan as well. It turns out that my thoughts before the race were all wrong and all I can do is say well done to the organizers…what a great event!

I was really worried about the high number of entrants and decided to collect my race number and goodie bag the day before the race. Whenever possible I do this so that I don’t have to worry about this on race day. I collected my number on Saturday and everything was done quickly and without any problems. The goodie bag was great! 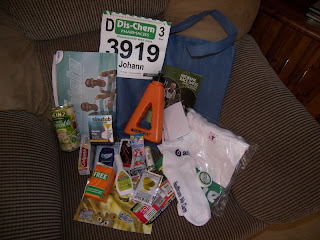 Sunday morning I played it safe and was at the venue by 04:55, well in time for the 06:00 start. Parking was swift and problem free, but I could see that runner’s arriving late might have problems. When I left home the sky was clear and I thought we were in for a hot and humid morning. I was wrong about this as well! By the time I reached the venue thick clouds were approaching from the East and soon it was completely overcast and even a little cool. The weather remained this way for the rest of the day and in the end it was great for running.

The start, which was one of my concerns, was very good. The race followed a new route this year and a big plus for the new route is much wider streets the first few kilometers. This helped a lot with congestion and the field could spread out nicely. I never felt bothered by the crowds and was able to relax the whole way. 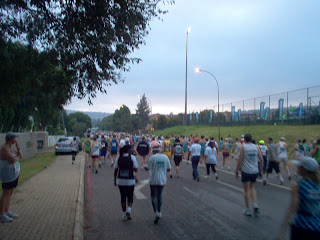 I wasn’t racing at all and used the race as a long training run. In fact, my plan was to be out on the road for at least two and a half hours. The first half was fairly easy with no hills to mention and some long down hills. I think we all knew that we had to go up at some point and this is exactly what we had to do. The first real climb started at about 11km and we went up all the way to 15km. The new route was definitely more difficult than the old one. The climb between 11km and 15km was from 3km to 10km on the old route. Running it so much later in the race was a much bigger challenge. This was also my most difficult part of the race. Approaching the water point at 15km I felt tired and needed a boost. The boost never came… From this point to about 17.2km is mostly flat and here I just kept going. Then we made a left turn and were hit with the most difficult hill of the race. The hill is steep and about 1km long. I did some walking here up to the highest point of the race at about 18.3km.

Once here it was downhill all the way! The downhill is very steep in some places and I took it easy to protect my quads from too much damage. I’ve never been a great downhill runner and a lot of people came past me on the descent.

Then, almost suddenly, I was at the turn into the finish. A steep little climb up to the field and then about two hundred meters on the grass to the finish. With lots of people cheering and some shouting my name (no, I don’t know them, they read it from my race number), I felt the boost at last and crossed the finish line with my son shouting and waving. To him I was the winner, even though I was very slow in 02:37. Mmm…maybe a bit lazy somewhere along the route…? Still, I did what I planned. Maybe 3 to 5 minutes to slow, but the main idea was a long run with no after effects. Tuesday morning I was back on the road for an 8.3km run and didn’t feel the race at all. That is good for me at this stage. 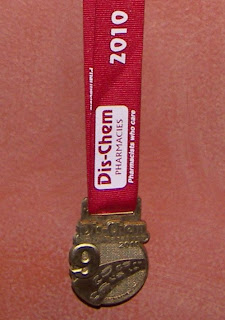 A nice medal and a cold Powerade to end a well organized and enjoyable race. Will I be back for my 5th Dischem? If it fits into my training/running/racing schedule the right way, definitely! If not, I’ll probably give it a miss. For those looking for a good half marathon at the beginning of the year, this is a great race to do. If you want to get the feel of and experience a big race, this is a good race to get into all of that.

I was wondering if you ever thought of changing the page layout of your blog?
Its very well written; I love what youve got to say.
But maybe you could a little more in the way of content so people could
connect with it better. Youve got an awful lot of text for only having one
or 2 images. Maybe you could space it out better?
Review my webpage - safe diets