The Columbia Highveld Challenge was held east of Pretoria on Saturday, 28 July. I was entered for the 30km but due to some family commitments and the late start time of the event (09:00) I downgraded to the 21km on the day.

Rohann and I went to the race alone as Anette was sick in bed and everyone else had other commitments. We arrived with enough time for me to prepare and do all my pre-race rituals. 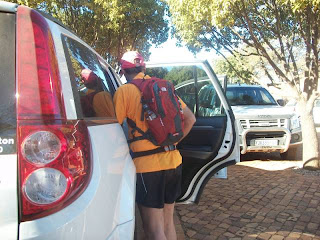 Standing at the start became a bit of a story as the start was delayed due to a lot of runners arriving late. I’m not sure why we had to wait for them as it didn’t look as if they were arriving on the road where we had to run. 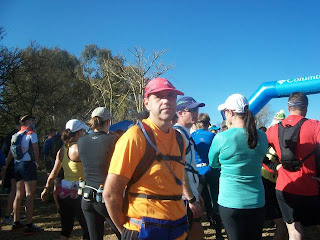 Waiting at the start.

The 21km was supposed to start at 09:10 and in the end we started at 09:25 with the sun already high in the clear skies. We were all happy to finally get going as we were all standing at the start from 08:50 for the race briefing. 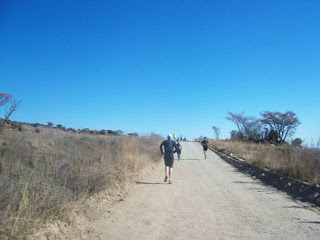 Finally on our way!

The first 2km or so was run on a dirt road and the field could spread out nicely before we turned onto the trails. Some runners ran quite fast on this road section and when we turned off onto the trail I was 3rd from the back! 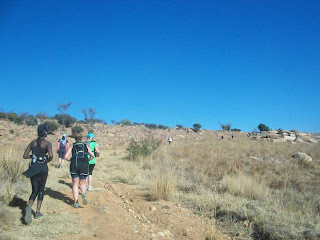 This didn’t bother me at all as I knew a lot of the runners would come back at me as we progressed. I could see there were a lot of people that were not very familiar with trail running in the race. These runners always start too fast and also battle to negotiate the more technical parts of the routes, so I always pass them later on. 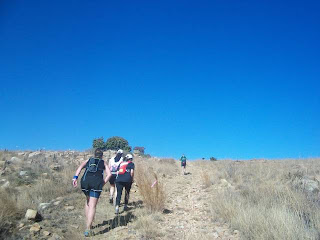 I was feeling good and in very good spirit as we started the first climb on the run. Life is good to me and being out on the trail in a race was, as always, very special. I love running on trails I’ve never been on! There was a fairly long and steady climb but the trail was good with only some rocks later on to make the going a bit harder. The view once at the top of the first climb was nice! 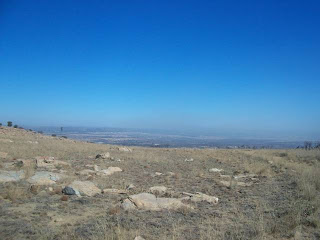 Great view from the top.

We then went onto some Jeep track before we started the first really technical bit of trail. On this trail I immediately started passing runners and this continued right to the end of the race. Yes, I passed people the whole time! I felt stronger and stronger as we progressed and had a really great run. 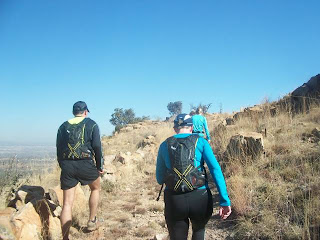 We ran on a bit of everything and I enjoyed that. Single track, Jeep track, dirt road and some more technical areas. A nice balance for a good trail run. At 9km there was a water point with some cool water in cups. I always drink at water points like this. It is nice to taste  water from a different source than my hydration pack. 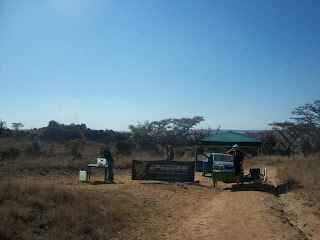 After the water point we ran on Jeep track for a while before turning onto another single track through some burnt grass. We are having a warm and very dry winter here in Gauteng and veldfires are very common. 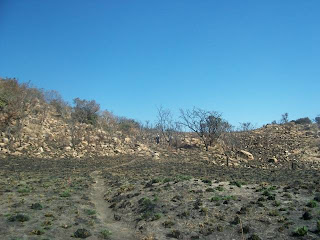 Dry trail through the burnt grass.

The trail through the burnt area took us to the most technical part of the race. This was a climb down some rocks and over some sand to the bottom of the hill we were on…down to a railway line! 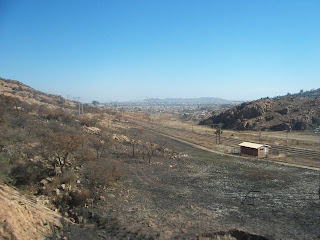 I am a model train fanatic and a bit of a train freak, so I was delighted! Yay! Running next to the railroad! Unfortunately no trains passed during this time but I was still having a ball. 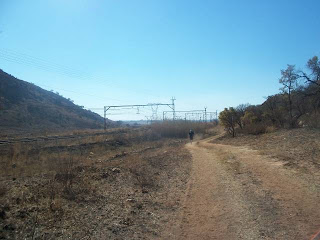 Next to the railway!

Talking about having a ball…I was amazed at how good I was feeling. Not tired at all and finding the race really nice. I was passing other runners as I went along and never felt anything not good about the whole experience. Me, the route, everything was good! 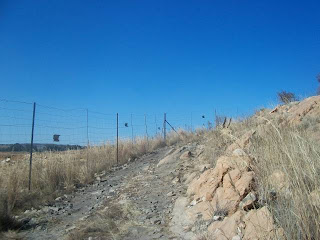 At some stage we had to climb back up from the railroad and we headed back into the rocky ridges. This was a nice, technical section with some beautiful views. It was quite warm by now and I was glad I wasn’t doing the 30km run. Maybe the downgrade in distance lifted me mentally and that’s why I was feeling so good. 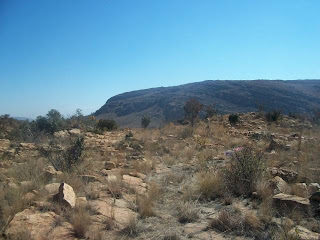 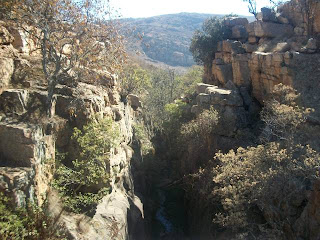 We ran passed a few dams during the last 5 to 6 km and at one we had to walk /climb on a concrete wall to get across. Things like this always adds to the fun for me. 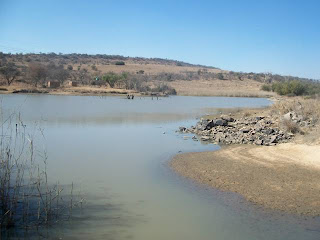 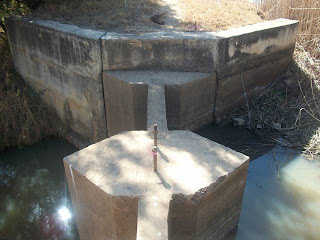 Some fun at the dam.

From here the route was mainly on dirt roads and I could understand why some reviews I read from last year said it was nearly boring. The road felt endless and the finish never came, but I was still strong and happy. 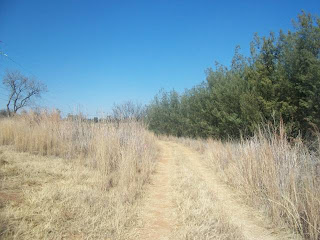 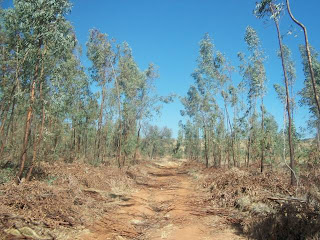 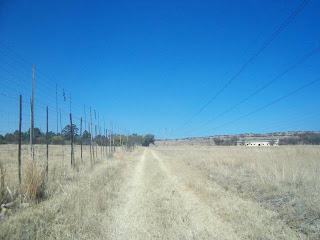 At some point we ran through some trees and I realized it was the only shade I’ve been in since the start. Running here in summer would be testing. 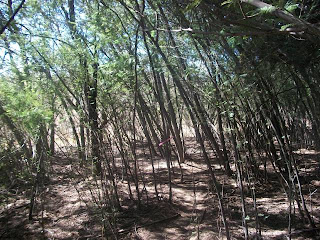 I kept moving along steadily and at some point caught up with two runners who were obviously not prepared for the course. It was a man and a woman and the guy was not carrying water or anything else. The girl had a small hydration pack but that could not have been enough even for one person. I offered the guy a Powerade I was not going to use and he gladly accepted it.

Then we had a long climb for the last 2km or so, climbing through some fences and gates. We were right in the middle of some cattle farms. 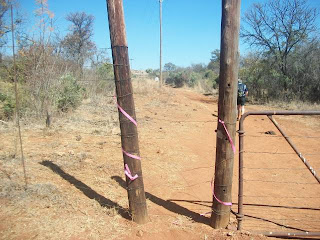 At last I saw Rohann running towards me and I knew the finish was close. It was great to see him there on the route! He is always the best supporter and not only for me, but for every runner that he sees. He always talks to every single person he happens to see. 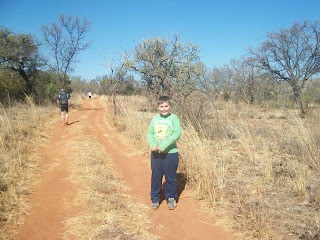 Best supporter in the world! 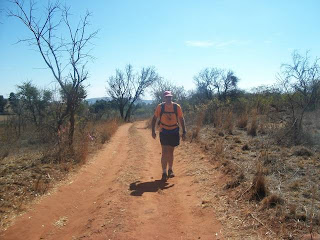 Feeling great, but ready to finish.

After a quick few photos we ran on and Rohann told me I need to run all the way up to the next dirt road and then make a u-turn on the other side of the fence for the run into the finish. He climbed through the fence and waited for me to take a photo. 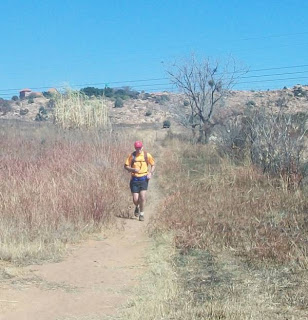 Then we ran to the finish together and I was really very happy and feeling great. I was also happy I didn’t have to carry on for the 30km run. :D 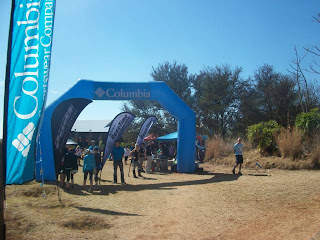 I received my medal and felt good. Another successful race in the bag. Race number 1365 done and dusted. 635 to go…lol! It’s my 49th birthday today so I better get a move on! 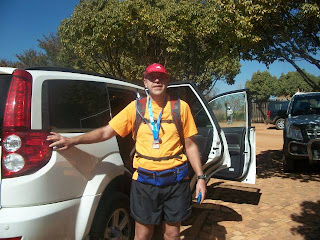 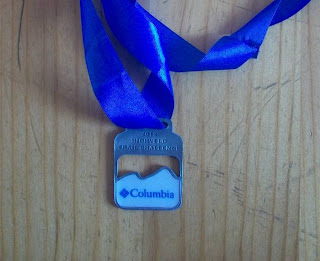 Thanks for reading and happy running!
Posted by Johann at 14:46

Congrats on finishing that challenging race!
I always hate long climb for the last km of the running path ... I think that race may be tough enough in Summer time, considering there is only 40 metres shade on the 21 km of the track.
Beautiful report, Johann!

As always, great pics! I love the one of you looking miserable as you're waiting for the race to start. :)

You are so adventurous - Great job!

Who was arriving late? The leader of the country? I can't believe you had to wait. Very cool about being near the rail way when it excited you so much.

As always, LOVE your race reports and gorgeous pictures! Your blue skies are as intensely blue as they are here in Colorado. That lack of shade though...ugh.

What a perfect way to spend your birthday!!! :)

Rohann is such a good kid. It's lovely that he comes along and cheers on his Dad and takes photos and cheers everyone on. You are blessed Johann. Happy Birthday.

Congratulations, some more great pics of what looks like another challenging (and hot) course! Well done, and Happy Birthday!

I like it when they make a course where you run a great variety of trails - very nice! Have a great week Johann!

Once again...you always have the best races that you participate in! Congrats!

You always have the best photos for trail runs. It just looks like miles and miles of fairly clear trail running and beautiful skies.

I can imagine the taste of water NOT from the hydration pack! Much better tasting..haha

You have the BEST cheerleader. I like that his name also rhymes with yours. :)

Always great to celebrate a birthday with a run! Happy birthday!

It sounds as though you really had a great time! My daughter is a good supporter too - although she's only 4 she loves waving and holding her thumbs up to runners and shouting ' brilliant!' !

Happy Birthday and congrats on an excellent race! How sweet to be able to finish with Rohann. Love it!

It's always a joy to read about your running adventures! Thank you so much for your simple and sweet comment...it really made my day!!!
Happy birthday!

That looked like a great mixture of terrain for you. And what amazingly blue skies--beautiful! Rohann is the cutest little cheerleader!

Congrats and happy birthday--may all your runs feel so good!

Your pictures are always beautiful, but I love the one Rohann took of you! What a great supporter! :) And what a great feeling to feel so strong throughout the race. Experience is a huge plus in a trail race, and you've DEFINITELY got plenty of race experience!

You run in the most amazing places! So very different than where I run most of the time.

(and having run my accidental trail run three weeks ago, I'm even more impressed by your abilities.)

First of all, congrats on the race! This is amazing.

And second, your pictures are just awesome. Your race reports are excellent. Way to go!