The end of 2010 is fast approaching and many of you have already posted your plans for 2011. I always have numerous running goals for at least the next three years, but I still plan each year in detail when we get to December. I have some main goals each year and then some smaller goals and milestones to help me reach my main goals.

In South Africa we are fortunate to have the “Nedbank Runner’s Guide To Road Races and Off-road Races” that is published each year to help with race planning. 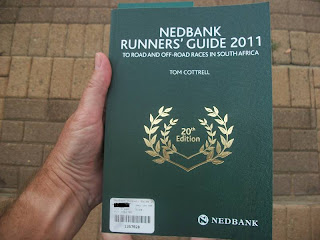 This is a 480 page gem that I live my life with every year. It contains details of all the races in the country with dates, start times, route descriptions and route profiles where available. 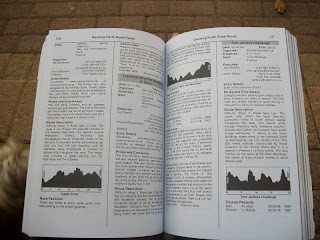 You can also visit www.runnersguide.co.za for tons of info about races in South Africa.

Randburg Harriers Half Marathon – 8 May

I know this is a very ambitious list, but I’m confident and aiming to do all of these as far as life allows. The other major goal that goes with this is another injury free year.

That Runners' Guide looks terrific! I look forward to following you next year- you've got some great events lined up. Good luck!

What a great reference book! That must require quite the advance planning for all the race directors. Looks like you are going to have a busy 2011. Can't wait to hear all about it :)

Wow, what a list. Have an excellent 2011. I'll enjoy reading all about it!

Dam, Johann! Now that's what i call a list of races!! wow! how fun and exciting! I think we're all jealous of your race calendar! how neat you have that book to look at. I can't wait to see your pictures from Comrades, I must convince Ryan to go to SA and run it with me!! Happy new year!

Terrific list! Perhaps we can try and organize to do a race together next time I am in SA. That is quite a useful guide....I have no doubt you will do all of those exciting races and remain injury-free.
Mooi loop en gelukkige Nuwe Jaar!

That book looks like it would be really neat. Wow - what a list! And I thought I was a racer....

I look forward to following you exciting 2011 journey.

Wow, that is an impressive list of races on your plan!

Johann -- you are the man. Holy Races Batman but I love the ambition and drive.

I can't wait to read all these race reports and hear hear to an injury free 2011.

What a great book!

Wow. You really race a lot!! That's fantastic that you have so many to choose from.

Now I am feeling a little unprganized. I don't have anything on the books until April- and haven't thought past that. Haha.

Guess I better get to work =D

That's a neat book, hard to imagine something similar in the U.S., maybe on a state by state basis. Really looking forward to the Odyssey Ultra, maybe the coolest race I've read about in a long time! Enjoy that ambitious year.

amazing list! I've got to get moving on mine. Here's to staying injury free in 2011!!

That is an impressive racing schedule. I love the book as well; what a great resource for runners.

That's an impressive race list! I've no doubt you'll meet your goals and I look forward to reading all of your reports! Happy 2011 running to you too!

The Runner’s Guide is really useful. I don't understand why there isn't that useful tool in Italy. The most important race are in the internet without route descriptions and route profiles.

What an amazing list!!! If I could get myself to do half..nay a quarter of that, I'd be thrilled. Happy New Year and may it be filled with love, laughter and many, many wonderful miles of running!!

Incredible Guide and What a schedule! I like your thinking:)

What a daunting schedule. I'm so impressed with the number of races you have available to you. SA must be a runner's paradise.

Wow Johann!! No doubt you will be busy busy busy. I wish we had a Runner's Guide similar to yours in the States! Can't wait to read all about your 2011 experiences. Happy New Year! :-)

That book is awesome. I wish someone would publish this in the US.

I can't wait to follow your journey in 2011!!! You are truly incredible and I wish my heel would allow me to do half of what you're doing! Hope you'll wear your green shirt for much of it!! :)

My goodness! I kept scrolling and scrolling and scrolling down on my page, and your race list just kept growing and growing and GROWING! Very impressive! Can't wait to read allllll about your exciting running life. And I also must admit, I'm a bit jealous of your Trail Running Bible! I've never seen anything like that! i would probably use that book as a pillow, I'd be so in love with it. :)

Here's to a great new year. Cheers!
A

You are a Madman Johann. Man, all of those races are sure to produce some amazing pictures. You should upload your race pics to Snapfish.com and create a bound photo album. You can create one per year. Just a thought.

Holy Schnikes! That is quite the running plan. I can see why you need that 480 pg book to plan. You are amazing.

wish we had a uk version
that a long race list planned..hope you stay well for them all

Wishing you an injury-free 2011 and great joy in completing all your planned races. Hope we will get to meet in 2011. Happy Holidays!

Awesome, Johann!!! That looks like quite a handy guide! You are always welcome here in Missouri!!

i am pretty sure we do not have anything like this in the US. at least not in s.carolina! that is an extensive list of races for 2011 :)

i like how you try to keep track of where various bloggers are so you can truly get to know different parts of the world! i have a few readers in spain that i should practice my spanish with more often but usually i am "lazy" and use google's translator. :(

i hope you had a wonderful christmas and happy new year!

That's quite the extensive book of races - jealous!
Hope the year is full of fun fun races that you have lined up!

What a great tool!

I am really looking forward to hearing about your FULL year. If my husband starts to complain about my racing calendar, I'm going to show him this page. :)

I want to get back to Durban for an Up run one of these years. I hope I don't wait too long.

You've got a full schedule there! I'll look forward to following along :)

That's cool there is an actual race book. I would assume its the longer, bigger races and not 5k's?

Very useful guide, we get the news by Runner's World or the web.
A full schedule, good luck on your goals.

That's so cool they publish an official book - wow!

I am so impressed by your racing schedule.

And, thank you so much for opening your heart and helping spread awareness for Angelman Syndrome. I'm so glad to have met a kindred spirit like you.