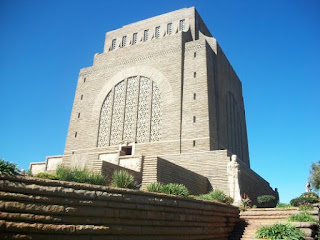 Venue: Voortrekker Monument, Pretoria, South Africa
As you could see from my previous post I was really excited about this race on Friday. Well, the race lived up to everything it promised and much, much more. It was a fantastic race and experience!

Saturday morning was very cold and it was -3°C (26.6F) when we left home. Pretoria is always a bit warmer than Johannesburg and Saturday was no exception. It was 0°C (32F) when we arrived at the venue. I should say it was 0° minus whatever the wind chill factor was. An absolutely icy wind was blowing at the start.

They promised, a bagpipe player, trumpeter, helicopter and canon and they delivered. The race commemorates fallen war heroes from the army and police and every year they dedicate the race to the fallen heroes of a specific battle or incident. This year the race was dedicated to the soldiers and policemen lost when Puma 164 was shot down on 5 September 1979.

There were 5 bagpipe players and a trumpeter from the Police force. 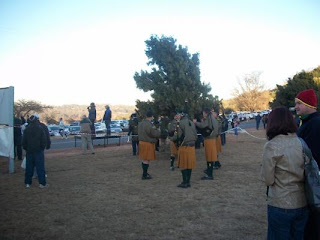 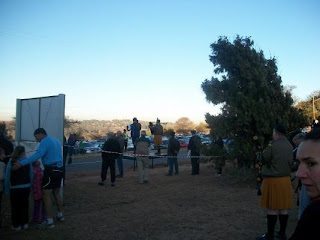 Bagpiper playing in memory of the fallen heroes. 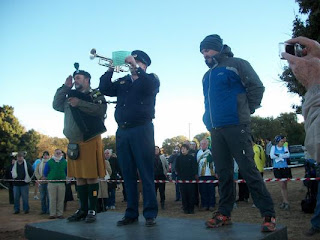 Police trumpeter playing the last call.
Four Harvard planes flew over followed by the last flying Puma of the SA air force. I missed a photo of the Harvards, but got one of the Puma. 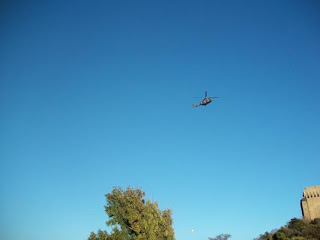 There was a minute silence while runners waited for the start. This was followed by a huge blast from a WWII canon to signal the start of the race. Everyone jumped a few feet in the air when the canon was fired and some woke up again! 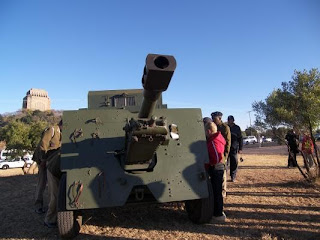 The start "gun".
Then we were off, running a race that was already very special. It was cold and I had my gloves on for the first 8km. The route is a combination of road and trail and I must say I really enjoyed this. The first part is fairly easy and I thought at some point the race was not as hard as advertised. There were a few climbs, but nothing serious at this stage. 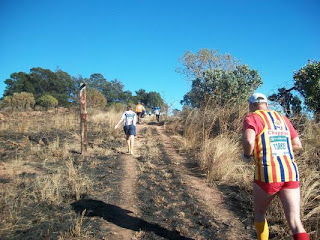 Happy to be running another lovely race. 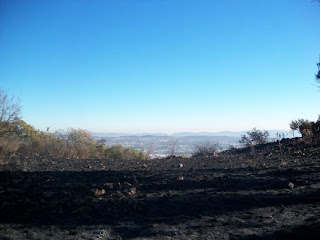 View to the North.
Runners were encouraged to keep the nature areas clean. 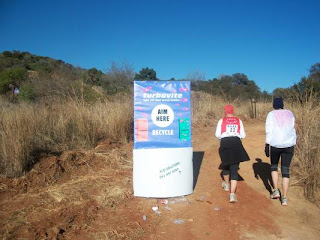 The first 18km were fairly easy with no technical trail and some tar road as well as lots of gravel road. The water points were well stocked and marshals as well as volunteers were very friendly and keen to help the runners. 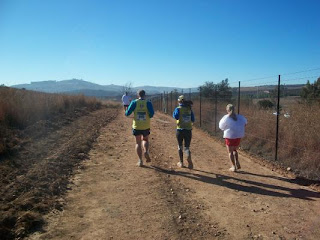 On the gravel road. 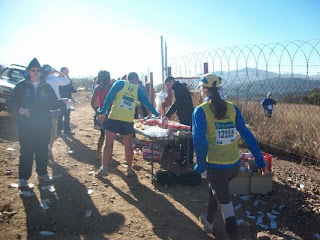 Water point with friendly staff.
With 9km to go we ran underneath one of the main roads in a storm water way. Someone remarked that luckily no rain was forecast for the area. 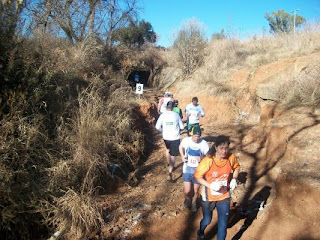 9km to go, going under the road. This was an out and back section including a 2km loop. 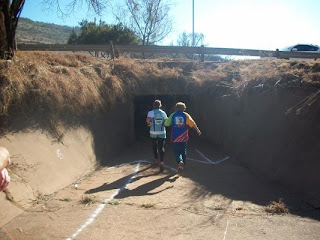 Returning after completing the loop. Watch your head!
Then, with 7km to go, the race suddenly lives up to its reputation of being one of the harder races around. Once we passed under the road on our way back we started the first main climb. With 18km already behind us, I could feel the hills immediately. I think I might have still been a little weak from the stomach bug I had a week ago as well, but looking at the runners around me I think it is just a very tough race. Everyone was struggling up the hills. 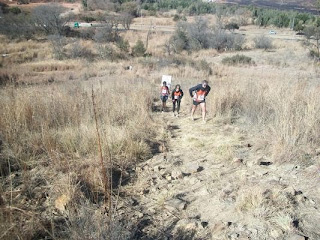 With 7km to go the race shows its true colors. 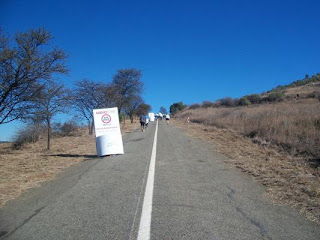 Even the tar road wasn’t easy anymore.
The trail was now not so easy anymore, as we went up and up and up. Everyone around me was battling and getting very quiet. 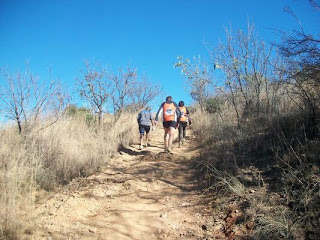 We were going up Schanskop, a hill with an old fort, Fort Schanskop, at the top. The climb up here is well known by locals and some runners come here regularly for hill training. The fort is now a museum and I wondered if we would get to see it on our run. We joined the road for the final part of the climb and then my question was answered. We did not only see the fort, we ran right through it! I really enjoyed this, what a special race! 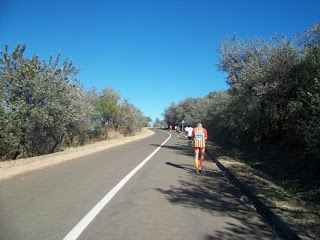 Final climb to the top. 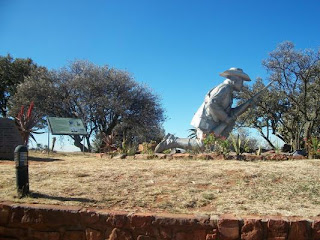 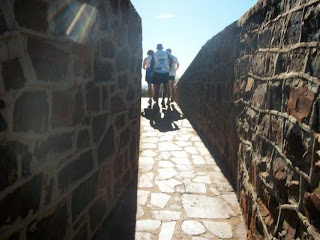 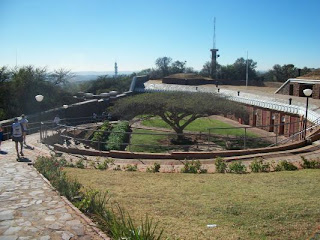 Running through Fort Schanskop, really great!
We then started our descent from the hill running on the road, back to the Voortrekker monument. 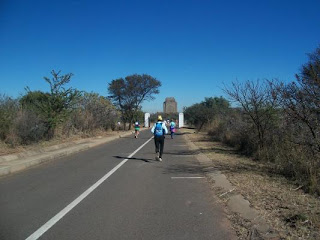 The descent on the road was steep in some places and I felt my quads complaining with a few other parts of my body also hurting. Yes, they were right; this is a very tough race, but a wonderful experience at the same time. With about 1.5km to go there was another sting in the tail, a last climb up a trail to make sure we didn’t forget the trail parts before we finish. 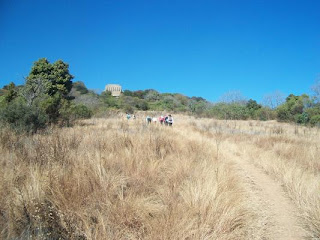 A final sting in the tail.
Then we were back on the hill of the Voortrekker monument. We ran past the South African Defence Force wall of remembrance and I took some time here, remembering some of my own friends who fell during battle when we were in the army. Indeed this race was special. 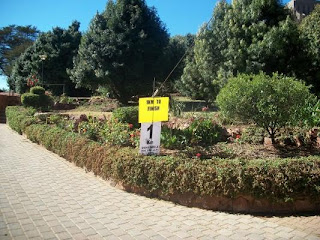 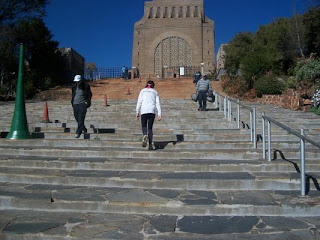 Some stairs to climb after 24km. 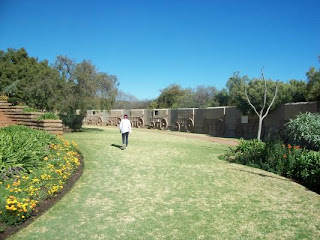 Inside the ox wagon wall - fntastic!
Once around the monument it was down the stairs (slowly) and then downhill to the finish. I turned for my final approach towards the finish. 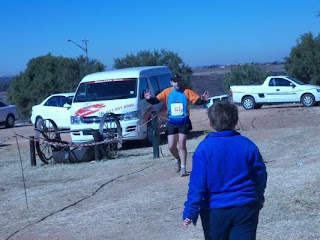 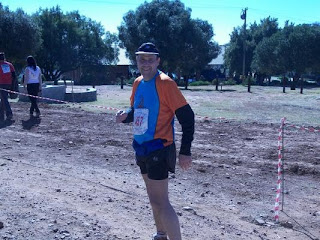 Happy!
I finished in 03:17, tired, but very happy and feeling very good. I must have lost about 10 minutes taking photos. I don’t mind this as I was looking for time on the legs anyway. The race gave me everything I could ask for and much more. I received my medal and a lovely piece of fudge. Well, my son said it was lovely fudge… 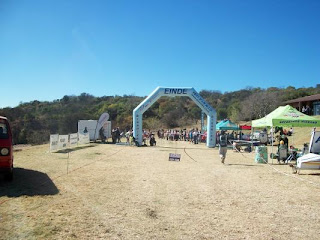 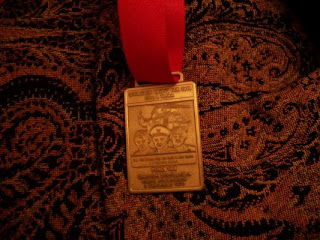 Medal...the fudge was long gone.
This was one of the best races I’ve ever experienced and I’ll be back next year for sure!

These and more photos can be viewed here.
Posted by Johann at 14:33

We Walked the 10.5 km on Saterday , we are a Community News paper from Pretoria East (The Eastern Times) . The group arived Saterday Morning thinking we are just going to walk the 5km but when we were half way with the 5 km walk we enjoyed it so much we decided to go on and do the 10.5 km . must say it was fun and we can't wait to do next year again (but just walking for us no running we won't survive that)

Excellent report Johann,
You finished that 25 km race tired, but it is important that you felt good after running.
You ran through a beautiful scenery and you showed us that interesting Voortrekker monument.
It's nice the route where you ran which is a combination of road and trail.

Great Race! Looks like you had a great time!

What a great race report. Sounds like an amazing race with a little bit of everything to keep you focused and challenged. Happy to hear you are on the mend. Rest up! Cheers!

Love all the pics. Seems like an unusual race. I like that you went through the fort. And fudge! I hope it was a good kind with no nuts and your son enjoyed it!

I love all the photos!

And seriously, a cannon start?! TOO AWESOME!

I must get to SA one day!!! beautiful.

What a wonderful day you all had! Well done Johan & Leon. For us, the members of the old Scout/Guide Venture Club of Salisbury, Rhodesia, it was more. It was to commemorate the fallen heroes, one of them being our own Alec Wesson, one of our members from the 70's. We are just so grateful to you all for the effort you put in to honour those who fell. May we never forget those who gave their lives for others.

Your race reports rock! That looks like it was one neat course! Thanks for taking pictures to share. :) Nice finish, too! Once I get over my slow times, I'm gonna follow your lead and take a camera too. Why not?! :)

This race looks like it was really special. I cannot BELIEVE the hills & stairs you had to run, and that they were all at the end! Other than that ... the race looks unforgettable. What an experience! Thanks for sharing this (and for taking those 10 minutes to take pictures!) -- run happy!

What a great race...how wonderful that you got to run such a special race!


Johan, I have a question I'd like to ask you. As a very experienced runner, I'm sure you've experienced some IT band pain at some point. If I want to do my mileage anyways, is it okay to walk fast or does that cause damage to the IT band? Thanks :) :)

Johann, you did not disapoint, I asked for pics of bagpipers and I got pics of bagpipers - 3 to be exact. It's always a trip to read you posts cuz you live in such a different world. Even your seasons are the opposite. And what's with all this km and C for tempature stuff? Kidding.

LOVE LOVE LOVE this race report, sounds like a wonderful experience...and well worth the extra 10 minutes for picture taking. Congratuations on an amazing, and FUN, accomplishment!

That was a mighty impressive start gun. What an amazing run - tough but really interesting. I love your pictures. Thanks for sharing them with us.

Man for three years now I have wanted to do this one but never get the chance, maybe next year. Thanks for sharing Johann

our pictures just keep getting better and better! :) and any race that starts off with bag pipes is sure to be a great one, your pics make me realize I need to sign up for a trail (like an official you get bling at the end type of run :)

Great race report! Fort Schanskop looks like an awesome place to include in a 25K race. The stairs at 24K must have been a challenge!

Hi Johann,
I love the picture of you after the race! You do look so happy:) This was another awesome race report with wonderful pictures! You had several challenging hills....way to tackle them! I love the bling too:)

Nice race report - glad you were able to have a memorable experience!

your race reports get better and better! I can't believe you had to climb stairs at the end, but you do look happy in the last photo! Congrats!

all your race reports on trail routes really makes me want to do a trail race. Maybe when it cools down I'll look for one. I love all the pictures.

oh, tell your son he has to share the fudge that YOU earned.

I really like how you do your race reports. Very cool. Do you take all the pictures yourself during the race? It sounds like you had a great time at a very fun race. Kind of makes me want to visit SA to race someday!

Thank you for taking the time off your race to take pictures. What an amazing experience, from the bagpipers to the fort to all of the hills. Beautiful and very moving!

Congrats! Thanks for taking us on a journey with your race report. What an awesome course indeed. The medal is cool too!

With Gain Credit Personal Loans, you can get instant loan/money for a wide range of your personal needs like renovation of your home, marriage in the family, a family holiday, your child's education, buying a house, medical expenses or any other emergencies. With minimum documentation, you can now avail a personal loan at attractive 3% interest rates. This is trust and honest loans which you will not regret, Contact us via Email: gaincreditloan01@gmail.com